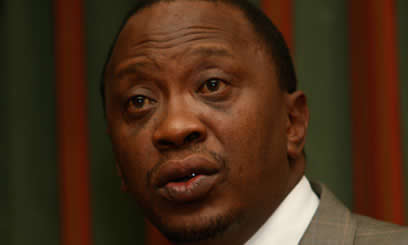 That Uhuru Kenyatta is open to constructive criticism is now an open secret, this is a warning to Uhuru’s inner core team especially those allied to TNA.
The long a waited demotion of Muthui Kariuki serves as a red frag to those taking extreme positions in defence of Uhuru.
“Uhuru is sending message that he needs no Kihika Kimani, Kariuki Chotara of the 21 st century” said a Nairobi based political consultant.

Even those abusing people online in the name of defending Uhuru are in for a rude shock, if they ever get arrested, most likely they will be charged and locked in for a long long time if found guilty, most of them are volunteers with no specific terms of reference. added the political consultant.

“You don’t insult Raila Odinga and continue feeding your wife and children through the proceeds of BABA’s sweat!” Dikembe Dikembe a University student leader voiced his views on the GREAT WALL of Dikembe Disembe (Facebook page)

Here is what The disgraced Muthui Kariuki had to say following his unceremonious exit!

Itâ€™s been an Honor and a Pleasure servingâ€¦

â€˜I am posting this in the face of news of my redeployment from the Office of Public Communication Secretary and Government Spokesman.

A statement from the Presidency, by now widely circulated in the multimedia news sector and already the subject of social media chatter, said the move was informed by the need to ensure â€˜coherence, clarity and consistencyâ€™ in the way the Government communicates.

The statement was issued by Mr. Manoah Esipisu, the Secretary Communication and State House Spokesperson, read in part:

â€œThe Secretary Communication and State House Spokesperson will take the lead in communicating Government in its entiretyâ€.

Mr. Esipisu also said: â€œThe Office of Public Communication Secretary and Government Spokesman does not fit within the new structure of President Uhuru Kenyattaâ€™s Administration and has consequently been shutâ€.

â€œMr. Muthui Kariuki, the last holder of the Government Spokesperson post, has been reassigned within Governmentâ€.

Mr. Esipisu was also kind and thoughtful enough to make a personal call to me and inform me of these perspectives, issues, developments and directions, for which I thank him and wish him all the best in his new government-wide capacity.

I also take this opportunity to most sincerely thank His Excellency President Uhuru Kenyatta for having allowed me to serve in my previous capacity until this morning.

On behalf of myself and my immediate family I also thank President Kenyatta for reassigning me in a different capacity within Government.

I hasten to reassure His Excellency that I will serve diligently and with value-adding professionalism, integrity and patriotism in my new capacity.

Now, did he (Muthui Kariuki) conclude that he will serve diligently and with value-adding professionalism, integrity and patriotism in my new capacity?? hahaha, this is a joke right?