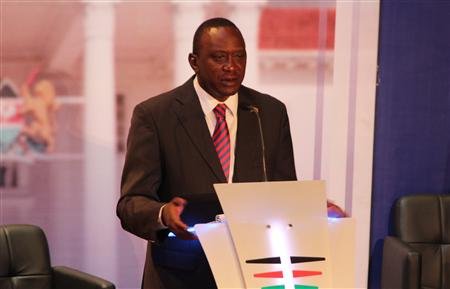 Intelligence reports indicate that the Jubilee coalition is a house in turmoil as a result of the backlash caused by Uhuruâ€™s utterances during the second and last presidential debate. Uhuruâ€™s lead strategist who guided his debate prep team has been reprimanded, and accusations and counter accusations have since been flying left, right and centre!

Indeed, Uhuru was eloquent and many agreed that his performance was good. However, that one killer remark changed fortunes in key battle ground areas of Rift Valley and Coast province.

It is said that a day after the debate, the National Intelligence Service, observed a seismic movement in the voter landscape, with disgruntled Kalenjin voters openly expressing their disgust at the remarks that implied that their huge tracts of ancestral land currently held by the Kikuyu diaspora, changed hands on â€œa willing buyer, willing seller basisâ€.

It is no longer business as usual and CORDâ€™s Raila Odinga is reaping big.

Reports indicate that Uhuruâ€™s unguarded remark is actually one of the reasons that led to Radio personality and local celebrity Joshua arap Sangâ€™s decision to break his silence and throw his weight behind Raila Odinga. The remark smacks of insincerity and contempt for those with land grievances dating to the colonial times.

A worried senior Intelligence officer close to Uhuru is said to have called Uhuru a day after the debate, wondering aloud who advises the son of Ngina. â€œHow could you throw the election away just like that? In that unguarded moment, you gave away the presidency to Tingaâ€™â€™, the senior intelligence officer mourned.

The intelligence officer is said to have also called to deliver the grim news to Ruto but instead was optimistic and dismissed the intelligence reports as â€œcooked stuffâ€ saying Rift Valley electorate were solidly behind Uhuru and Jubilee to the last man.

â€œMy friend, mambo ya debate hiyo ni ya watu wa Nairobi, the Kalenjin nation is steadfast in Jubilee, mambo ya mashamba tuliongea Nakuru tukamaliza. I think you need to do another survey. Hii ni porojo, unless there is something else you want us to believe. Kama iko mambo ingine you better say it openlyâ€, a furious Ruto retorted.

Uhuru is blaming URP strategists for convincing him to attend the debate for which he had expressed reservations to attend.

â€œUhuru had sound advice from his TNA team particularly that of Jasper Mbiuki, his Director of legal affairs and Public relations Ed Staite to skip the debate but Ruto, Murkomen and other URP stalwarts in the coalition insisted that he attendsâ€. A source close to Uhuru who sought anonymity said.

The source indicated that the TNA wing is blaming the URP team for the debate fiasco, as they are the ones who introduced a land policy expert who played a big role in Uhuru debate preparations.

It is said that on Wednesday, both Uhuru and Ruto were together briefed again on the new developments on the ground that CORD was regaining support among the Kalenjins, and was already past the 50% mark. It was agreed that leading URP luminaries be massively facilitated to counter the worrying situation.

The impact of Joshua Sangâ€™s defection to CORD also featured in the intelligence reports. It was agreed that URP commission radio shows and other equally fast channels to discredit Arap Sang and depict him as a sell out among the locals.
TNA strategists also requested Ruto, for avoidance of any doubt, to assemble a group of Kalenjin elders to issue a press statement distancing themselves from those who condemned Kenyattaâ€™s willing buyer, willing seller remarks.

The URP team is reported to be putting their best foot forward to ensure the much-anticipated Jubilee rally at the historic Kapkatet stadium rests all unsettled and emerging issues. The elders will be assembled to reconfirm their stand and urge the Kalenjin community to remain steadfast in Jubilee.
However, Ground sources maintain that the Kalenjin community is steadily leaning towards CORD, a situation that may lead to the widening gap between CORD and Jubilee. The remark by Kenyatta seems to have spread wide and deep into the villages like bush fire on a dry savannah grassland.