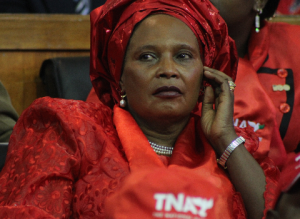 The apology by Mr Kenyatta came minutes after it was reported on Tuesday evening that powerful businesswoman Mary Wambui had stormed IEBC offices demanding her name to be included in the TNA list of aspirants for the 4th March elections.

Ealier Ms Wambui had alleged that dark forces were out to frustrate her Othaya parliamentary bid and that is why her name was not included in the TNA list sent to IEBC.

Ms Wambui roamed into victory in the January 18th TNA Othaya nominations winning by a margin of more than 3000 votes against her closest challenger Mr Gichuki Mugambi.

On Tuesday evening Mr Mugambi confirmed to a local FM station that he had the TNA nomination certificate for the Othaya constituency contradicting party chairman Sakaja Johnson who had maintained that Ms Wambui was the nominee of the party.

On the 17th and 18th of January 2013; The National Alliance (TNA) conducted a nationwide Nominations exercise covering all the elective positions and seats available for contest during the next General Election. Despite our best efforts the exercise, while successful, began late and experienced some logistical challenges. I would like to extend my sincere apologies for the inconvenience that our Members and Observers experienced as a result of this. Lessons have been learned and in future we anticipate that we shall run a smooth and flawless exercise.
Over 3.7 million voters participated in the nominations exercise. It was profoundly humbling to watch these men and women from all walks of life braving long queues, logistical mishaps as well as the elements in order to play their part in the Kenyan democratic process. Kenyaâ€™s future is in our hands and I would like to take this opportunity to thank every person who participated in the nominations exercise, in whichever party, for helping further strengthen our nascent democracy.
TNA takes pride in being a pioneering and innovative political party that adopts cutting-age practices and technologies in its operations. For the first time in Kenya, a political party conducted a nationwide nominations exercise in the full glare of media and social networking scrutiny. As a Party we were equally forthcoming with the challenges we faced as we were with our successes. I am particularly heartened by the fact that those who emerged victorious in our nominations celebrated their victory with humility and a spirit inclusiveness while the losers conceded graciously and vowed to heed the peopleâ€™s voice and work with the nominees. This is the essence of mature democracy.
The nominations exercise was not without challenges. In some areas disputes arose regarding the official results. TNA had put together a competent and respected dispute resolution mechanism that quickly and fairly heard all grievances. It is a credit to the quality of the nominations exercise that only seven (7) seats saw a reversal of the initially announced results.
Even as the vast majority of disputes were resolved amicably through the Partyâ€™s internal processes, we recognize that there may be a small number of complainants who would wish to be heard further. TNA would like to inform them that there is an avenue for appeal to the Independent Electoral and Boundaries Commission (IEBC) for review of particular nomination results. As a Party, we welcome scrutiny of our actions and decisions and encourage a culture of openness and transparency in all that we do.
I would like to thank all the TNA members, officials and volunteers who helped make our nominations exercise a success despite the tremendous challenges we faced. With that indomitable spirit and commitment to making Kenyaâ€™s future better and brighter, there is no limit to what we can achieve. Let us pull together and build a happy, prosperous and united Kenya with freedom, justice and opportunity for all.
God Bless You, and may God Bless Kenya.