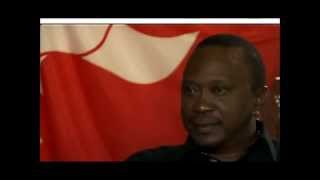 Jubilee presidential candidate Uhuru Kenyatta insists he can run government affairs from the Hague in case he wins the March 4th general elections, in a detailed interview on “Talk to Al Jazeera” by Folly Bah Thibault of Al Jazeera TV, Uhuru said Kenya had functioning institutions and the government will function while him and Ruto will be busy defending themselves at the ICC.

In the interview, a forceful Mr Kenyatta seemed to read from the same script as his running mate William Ruto who in October 2012 said with advancement in technology (Skype, telephone, Facebook, Twitter, Teleconferencing et el) he could effectively run Kenya government affairs while attending to his trial at the Hague.

â€œI would have no problem going to The Hague and running the affairs of Kenya. We are in an ICT world and I can do many things from the internet to ensure that Kenya is running even as I attend to other issues. We can chew gum and still scale the stairs at the same time,â€ Ruto said when asked how he would rule Kenya as President while still facing charges at The Hague.

Here is the the full interview;