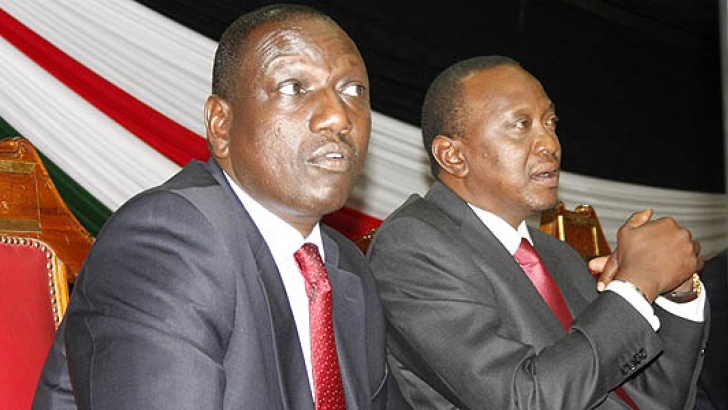 President Uhuru Kenyatta’s Jubilee hits low marks in survey
National approval of the Jubilee Government appears to be plummeting, with the latest opinion poll revealing that most Kenyans think the country is heading in the wrong direction.

And the media remains the most trusted institution at 68 per cent, higher even than President Uhuru Kenyatta’s approval rating of 53 per cent, in the same opinion poll released yesterday by Ipsos Synovate.

The study has come at a time Uhuru’s administration continues to battle rising perception that it is unfriendly to the media and non-governmental organisations and is doing too little to stem the growing cost of living and insecurity.

The survey reveals that as many as six out of 10 Kenyans (or 64 per cent) believe the Jubilee Government is taking Kenya the wrong way.

That is a whole two-thirds of the people sampled in the survey. Only a minority (29 per cent) said things are going in the right direction. Among issues seen to be sinking the approval ratings of the eight-month old Jubilee regime are its failure to address the high cost of living, corruption in government, greed among elected leaders and the increased incidences of insecurity.

participants in the survey were asked what they liked least about the Jubilee regime, three out of 10 (35 per cent) said the Uhuru and Ruto-led team has failed to address the high cost of living, while 17 per cent pointed to alleged corruption in government. INSECURITY CHALLENGE Twelve per cent of participants in the survey saw the insecurity challenge as an unsolved issue.

It is only in Central Kenya where the President enjoys support, with most respondents (54 per cent) polled saying the country is heading in the right direction. But a significant minority (37 per cent) in the same region said things are not so rosy.

Surprisingly, some of the strongest disapprovals are from Rift Valley, the backyard of Deputy President Ruto, with half the people polled (52 per cent) saying the country is heading in the wrong direction. Ruto’s United Republican Party ( URP) is in the ruling Jubilee coalition that included Uhuru’s The National Alliance party.

Some in URP are said to be unhappy with the manner in which jobs in government are being dished out, saying Rift Valley has gotten a raw deal despite URP being a key player in Jubilee. Not surprisingly, the strongest disapproval came from Nyanza, the home ground of former Prime Minister and Uhuru’s main political rival, Raila Odinga, with an overwhelming 89 per cent respondents stating the country is going in the wrong direction. Other areas where Jubilee received the strongest disapproval ratings include Coast (85 per cent) and Western (78 per cent), both strongholds of CORD as

well as Nairobi (72 per cent) and North Eastern (68 per cent). Most people (62 per cent) in Eastern also believe things are heading in the wrong direction. Even worse, more than half of those polled in the survey (52 per cent) believe the Jubilee government has done “nothing” during the time it has been office. That figure is significantly higher than those who believe that free maternal healthcare is a key achievement (30 per cent) of the Jubilee regime. COST OF LIVING Asked about the most serious problems facing the country currently, Kenyans surveyed cited high cost of living, lack of employment opportunities, crime or insecurity and corruption in that order.

“As the rate of inflation has continued to creep up since June this year, the big increase in concern with this issue is seen between November 2012 and November 2013,” said Synovate’s Research Analyst Tom Wolf while releasing the results yesterday.

Kenyans also cited leadership wrangles in Jubilee due to cases in the International Criminal Court as being as serious as tribalism in the country, followed by the threat of terrorism. Among the things that some Kenyans like about the Jubilee government is the free maternal healthcare in which expectant mothers don’t pay delivery fees in public health facilities.

They also like the youthful or energetic leadership of President Kenyatta and his Deputy William Ruto as well as other elected leaders The opinion poll was done on the first nine days of November through face-to-face interviews of 2060 Kenyans across the country.

The margin-of-error attributed to sampling and other random effect of this poll’s sample size is +/- 2.2 with a 95 per cent confidence level. When participants were also asked to rate 23 public institutions and officials in terms of how much trust they have in them. Nine out of 23 of those obtained higher scores in terms of distrust compared to trust.

Among the best performing institutions in the trust index is the media (68 per cent) followed by a distant second by the Kenya Defence Forces (32 per cent), whose credibility took a serious beating after they faced claims of mishandling the security operation against the attackers of the Westgate Shopping Mall in September this year.