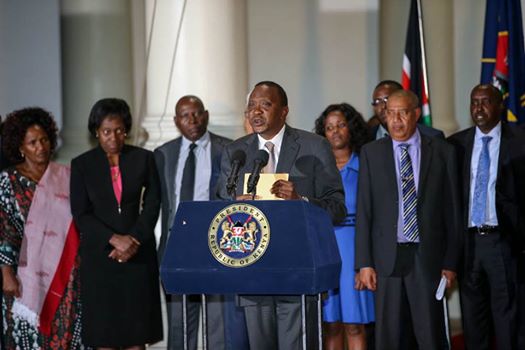 Mystery surrounds the arrest of five officials from Lamu County who had come for this weekâ€™s meeting with President Kenyatta at State House, Nairobi. The five â€“ two drivers and three officials â€“ were arrested at around 3:30am on Thursday at a roadblock between Salama and Konza by policemen in three cars.

The five were in a Toyota Prado belonging to Lamu County and they were leading a bus that was bringing about 50 delegates for the meeting. The arrest of the five men nearly scuttled the meeting arranged by State House and which dramatically resulted in the naming of people alleged to have grabbed chunks of lands in Lamu.

They were in charge of logistics for the trip and they were carrying money to pay hotel bills and other expenses for the delegates Police officers, who stopped them, ordered them to lie down on their stomachs on the tarmac. â€œOne of the officers shot in between us,â€ said one of the victims who requested not to be named for fear of victimisation.

They were then ordered to get into the three police cars and then they were hooded. One of the police officers drove the Toyota Prado they were travelling in. They were then taken to one of the General Service Unit (GSU) training camps in Embakassi where they were interrogated for about three hours. â€œThey asked us whether we had anything to do with the violence in Lamu and we said no,â€ said the official.

â€œBut the most disturbing bit is that while doing this, they dropped grenades between our legs for a number of times,â€ he added. At around seven oâ€™clock in the morning, they were taken to the Criminal Investigations Department (CID) headquarters in Kiambu and then handed over to officers from the Crime Prevention Unit. They were interrogated until 3:30 oâ€™clock in the evening when they were suddenly driven to Wilson Airport to board a police helicopter that flew them to Manda Bay in Lamu.

They were then split into two groups and handed over to GSU officers who took them to Mpeketoni. â€œThree of my colleagues in one of the cars were roughed up,â€ said the official. When they arrived at Mpeketoni, one of the senior GSU officers told them they were going to detain Mr Bwana and the driver Abdulrazak Mohammed overnight. â€œBut the officer was very professional. He paid our hotel bills and assured us of our security,â€ said the official.

On Friday morning, the officer informed them that they were going to detain Mr Abdulrazak alone. Mr Bwana was let to go. The remaining four men were then taken to Manda Bay to board the police chopper they had boarded the previous day and were brought back to Nairobi.

They arrived at around 10:30 oâ€™clock in the morning and they were taken straight to State House, just as President Kenyatta was beginning the second day of talks with the delegates. The President acknowledged them and it is believed that the four were released on his orders. â€œHe acknowledged the chief by name,â€ said the official.

On Thursday evening, Governor Timamy raised the issue of the arrested officials during their first meeting with the President. â€œThe President apologised for the incident,â€ said Mr Timamy, but he suspected foul play by people who might not have wanted the meeting to take place.

â€œThe whole thing seemed well-planned. It seems to me the police who arrested us had prior information about our journey and had instructions to act the way they did,â€ said the official. The Toyota Prado belonging to Lamu County was still detained at the CID headquarters by the time of going to press.

On Thursday, the 50 delegates from Lamu had to change buses several times from Lamu for â€œsecurityâ€ reasons. â€œWe had to change the bus to travel back to Lamu. When we arrived in Malindi, we changed to another bus and we had done the same in Mombasa,â€ said Mr Johnson Ndolokani, one of the delegates. The meeting was nearly thrown into further disarray after Lamu West MP Julius Ndegwa led a separate delegation of about 20 people to the meeting.

Lamu County Women Representative Shakila Abdalla is said to have been miffed at the turn of events that she threatened to abandon the meeting altogether. The meeting was organised by State House who requested Mr Timamy to form an all-inclusive delegation representative of the face of Lamu for a one-on-one meeting with the President. The meeting took place in the wake of a series of attacks that have so far claimed 94 lives and destroyed property of unknown value.

Although Somaliaâ€™s terror group Al Shabaab has claimed responsibility for the attacks, the State believes the violence was funded and orchestrated by local politicians. Mr Timamy was arrested and questioned by police in relation to the violence but is yet to be formally charged. But the State has informed the High Court in Mombasa that it intends to prefer charges of murder, terrorism and forcible transfer of people. Although the matter of his arrest was not raised at the meeting, we could not establish whether it came up during a private meeting they had with the President.

The delegationâ€™s main agenda with the President was to seek ways of bringing harmony among the residents of Lamu after the attacks, but the Thursday meeting was dominated by land issues. â€œWe were all taken by surprise when the list of the landowners in Lamu was released. We did not anticipate such a move and we were all caught by surprise,â€ said one of the Lamu County officials. Although he lauded the Presidentâ€™s move as the first step in redressing the land issues in Lamu, the official questioned why some ranches had been omitted from the list. â€œThere are about five huge ranches which ought to have been included in this list because the residents of Lamu have long raised issue with the manner in which the owners acquired them. If we are talking about fairness in addressing land problems there, then the government should have no sacred cows,â€ he said.