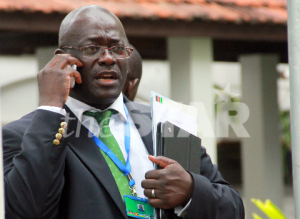 By Oliver Mathenge for the STAR

STATE House has asked every ministry for between one and six million shillings to “sell and market Jubilee programmes.”

The “marketing” project to be run by the Director of the Presidential Strategic Communication Unit could net up to Sh100 million from the fundraising exercise.

On December 9, Energy PS Joseph Njoroge replied to Esipisu that his ministry had raised Sh1 million and was looking for the rest.

“We have also written to the parastatals under this ministry to make contributions towards achieving your request for Sh4,363,250. By a copy of this letter, the CEOs of these parastatals are requested to expedite and make good the commitment,” Njoroge wrote.

Â Njoroge wrote that he was “delighted” that the project would also support the ministry’s “effort to dissemination of information on Energy projects.”

Questions are now being raised within government about why Esipisu should asking ministries for financial support for marketing when he has his own budget.

The PSCU has been shooting video documentaries on the laptop programme, maternity, energy, ports reforms, rapid response and other issues.

“Instead of using the State House vote, they are twisting the arms of ministries to fund the project. This is very suspect,” said a government insider.

Esipisu or Njoroge were futile have both been unavailable for comment since Sunday. Other PSCU officials said that they were unaware of the project and only Esipisu could respond since he was the Government Spokesman.

In the current budget, the seven State Houses and lodges across Kenya have been allocated Sh1.8 billion for recurrent and development expenditure. The repairs, routine maintenance and facelift of the buildings were to cost Sh300 million.