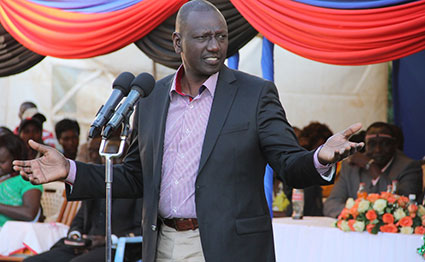 Allies of Deputy President William Ruto are worried about his political future after President Uhuru Kenyatta leaves office. Some of Rutoâ€™s close allies are concerned that he may not become president because there is no guarantee that voters from the populous Mt Kenya region, where Uhuru enjoys massive support, will back his bid.

Speaking in Nandi County last weekend, Kericho Senator Charles Keter said the deep-seated suspicions in the URP arm of the ruling coalition were misplaced because there was no binding commitment for TNA to support Ruto. Speaking at Kaptumo during a fund-raiser at the African Gospel Church, the URP senator and close ally of the Deputy President said:

â€œWe supported President Uhuru Kenyattaâ€™s presidential bid in the 2013 election unconditionally. We will also support his second term unconditionally. URP does not expect anything in return from the TNA side of the coalition.â€ Keterâ€™s â€˜unconditional supportâ€™ claim appears to have been in contrast with sentiments of a growing number of URP politicians who have been feeding partyâ€™s supporters with the â€˜we-will-get-the-presidency-in 2022â€™ line in political rallies

We will support Kenyattaâ€™s two terms, and thereafter Ruto will pick the mantle for another 10 years before any changes are made on our pact with TNA,â€ Murkomen is on record as having said. Sang said: â€œIt has taken us more than 15 years to groom Ruto to hold the position of DP. We are now so close to the throne. It takes years of strategy, humility and patience to ascend to the countryâ€™s top seat. Ruto must ascend to the presidency.â€

Last weekâ€™s comments by Senator Keter made in the presence of 16 Jubilee leaders suggests that URP could have run out of the cards to cement a TNA-supported Ruto presidential bid, instead choosing the meeker option of leaving it to time and fate. â€œCome 2022, we will front our presidential candidate. Whether TNA will want to support us or not will be their choice. We will have kept our part of the bargain. URP members are not liars,â€ said the senator.

They are waiting for the house to collapse,â€ said Ngunjiri. The TNA MPs, however, downplayed Keterâ€™s insinuations of betrayal against their party, and promised â€œ100 per centâ€ support for Rutoâ€™s presidential bid in 2022. â€œA mango tree with ripe mangoes will always have stones thrown at it. Our eyes are on 2022 and we will support Ruto,â€ said Mbiuki. â€œThe Deputy President is a uniting factor in our country. We like his political style. Those waiting for the Jubilee collapse have a long wait,â€ said Ngunjiri. Kajuju said: â€œWe in Meru have accepted the leadership of the Deputy President and will support his presidential bid come 2022â€.

Linturi called on Jubilee members to guard the alliance jealously and asked URP leaders and supporters not to lose faith in the ruling coalition. â€œURP will have played its part in supporting Uhuruâ€™s two terms. Although you say it was unconditional support, the gesture is not lost to us in TNA. We know 2022 will soon be here and payback will be in order,â€ said the Igembe South legislator.

Linturi also maintained that â€˜URP was not indebted to TNAâ€™ having agreed to support Kenyattaâ€™s presidency. â€œWe in TNA are indebted to URP,â€ he added. Some URP supporters and leaders have accused the Deputy President of not doing enough to ensure that Rift Valley communities benefit.

Nandi Hills legislator Alfred Keter has often accused Ruto of playing second fiddle to TNA. Keter and his allies accuse Ruto of allowing the TNA faction to dominate crucial decision-making organs of the coalition and say plum state jobs are skewed in favour of this party whose supporters benefit most from the allocation of public resources.