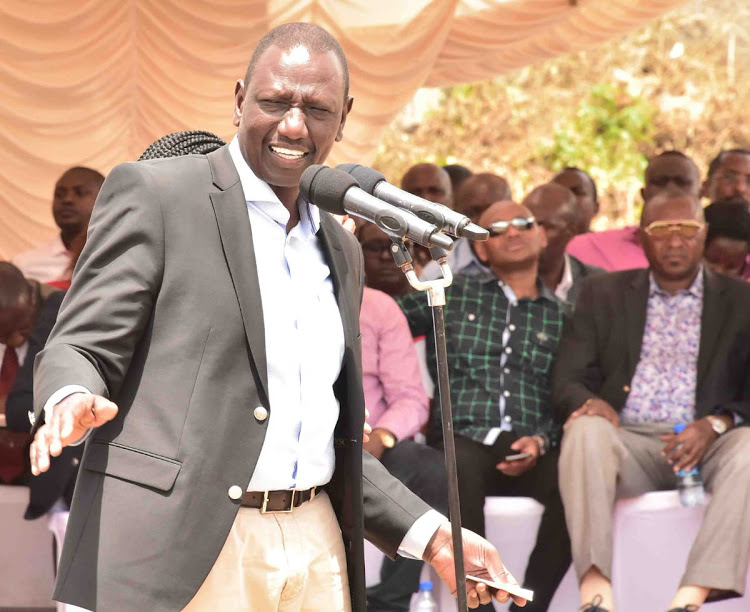 The Deputy President William Ruto together with his tanga tanga crew took to PCEA Church in Mwiki Kasarani where he led a fundraiser for construction of the church and not only contributed ksh 2,million but also decided in return to use the podium to attack his most feared political rival  the AU envoy Raila Odinga.

Ruto shared his dissatisfaction over the fact that the handshake had given him powers to run Jubilee and has been giving them lectures on how to fight corruption and run the government.

“I am seeing that man of riddles giving us lectures on how to fight corruption and run the government. So you have killed the opposition, why cant you go and put your house in order before you tell us how to run the government,” he said.

Ruto added that Raila and his team are venting anger on him over his 2022 presidential ambitions because they cannot attack the president, who is serving his second and final term in office.

“What I will not agree is to allow these people to use propaganda and politics of corruption to rock Jubilee, trash our record and destroy the legacy of Uhuru Kenyatta. That I will not agree,” he said publicly admitting that his ambitions could crushed the opposition leaders actions.

Awhile back he NASA chief said Mr Ruto a former ally-turned-foe should reach out to him (Raila) because that was the only way he would be guaranteed of ascending to the country’s top seat come next General Election.

He told Ruto that politicians from the Mt Kenya region were already scheming against him.

“My election victory has been stolen since 2007 and I would like to tell Deputy President William Ruto that he will not ascend to the presidency without my political support,” said Raila.