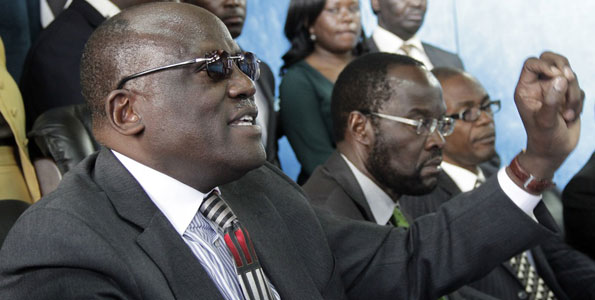 STATEMENT ON ATTACKS ON RT. HON RAILA ODINGA
We want to begin with disclaimer. We do not know what Mr Muthui Kariuki is in the country, whether he is a legitimate government official and whomhe speaks for.

But we do know that in troubled regimes, such characters, holding amorphous and even non-existent positions, are used to say what only the shameless, the senseless and the desperate can say.
Two days ago, His Excellency Isaac Rutto, the Governor of Bomet reminded us of the terror and tyranny of the likes of Kariuki Chotarausing their amorphous positions in Kanu.
The Governor warned us to be on the look out because those shameless characters, who caused so much pain and destruction in our politics, are being reborn and set loose by Jubilee.

We find it very unfortunate, juvenile and desperate for the government to claim that Rt. Hon. RailaOdinga had the capacity to ferry people to pack a whole football stadium beyond capacity, pay all of them and ask them to shout, to which they all obliged.

This position, stated by a so-called government spokesman, amounts to belittling the intelligence and the feelings of an entire community. It cannot wash.

The Abagusii are hard working, business minded people. They also have a deep sense of social connection. They stand up with and for each other in good and bad times. And they show and express their feelings openly, in broad day light, not in night meetings, and in the best way they believe will drive the point home.
To imply that the people who turned up at Gusii Stadium to mourn and burry their dead were not mourners but political hirelings is an insult and an act of desperation.
We state without fear that MrOdinga was a mourner just like all the others. He neither ferried nor paid anyone. If he got a standing ovation, it was a result of the communityâ€™s respect for him. Those who were booed ought to work to earn that respect. Threatening and calling the community names will not help.
The incident in Kisii has given birth to another absurd demand by the government. Because Jubilee team was booed in Kisii, the government has suddenly remembered that former Prime Minister RailaOdinga has not returned government vehicles, that he has a siren and that he has demanded respect.
If a governmentâ€™s response to a peopleâ€™s expression of displeasure is to demand vehicles in possession of a former Prime Minister, then it is clear that the government is hitting a deep, troubling and desperate low. In desperation, the government is getting vindictive, vengeful, bitter and angry.
We have seen this vindictiveness directed at the late Senator MutulaKilonzoâ€™s family where Jubilee has sought to destroy the careers, choices and future of the late senatorâ€™s children simply because they rejected the Jubilee ticket.
We have seen this vindictiveness against KNUT officials. For the first time, KNUT leaders were handcuffed, and they have been left with heavy fines to pay. We have reason to worry.
Kenyans should be worried that anger and the spirit of revenge are ruling the land.

We wish to remind the government that RailaOdinga was
A co-principal in the Grand Coalition Government. He appointed half the Cabinet, just like MrMwaiKibaki. Raila supervised government. Because of his diligence and dedication, we got a new constitution.
It beats logic, the rule of fairness and justice to demand that MrOdinga surrenders all government vehicles while the man with whom he shared power travels in a bigger fleet.
Even retired President Moi keeps his fleet.
This move is discriminatory and vindictive. We will not accept it. If vehicles are going to be repossessed, they must be repossessed from everyone; from Moi to Kibaki to Raila.

Finally, we wish to remind the government to abandon the thinking that they can put Raila down by denying him priviledges that should be due to him. Raila is a creation of the people, not of the state. Denying him a vehicle, a VIP lounge, a retirement package will not diminish his status.
Do not govern the country in anger. Do not govern with clenched fists. Be fair, be just, respond to the demands of the people of Kenya.