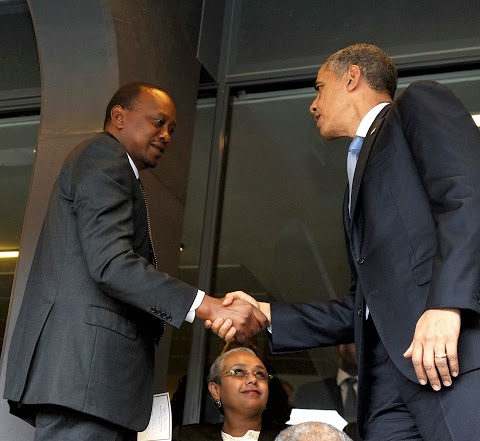 By Standard Reporter in SA.

South Africa: President Uhuru Kenyatta was kept waiting in his hotel room along with his entourage for close to an hour for the police escort to take him to the late Nelson Mandelaâ€™s memorial service in Johannesburg, according to a knowledgeable source.

The service was held at the FNB Stadium on Tuesday. â€œThe President was staying in a private hotel frequented by celebrities such as Oprah Winfrey waiting for the escort to come. The police outriders apparently got lost and could not find the hotel,â€ the source told The Standard. The hotel in the leafy suburbs of Sandton is located in a very private and secure area.

The President, according to the source, sat in his room watching the event on television as other heads of state were being screened arriving and being announced at the stadium. The South African police escort did not communicate that they were unable to find the hotel or communicate with Kenya High Commission officials for directions. After a while, President Kenyatta got up and announced they should go to the stadium. The entourage drove out using his local security and vehicles with flashing lights.

Local police outriders with BMW made bikes and police cars with mounted blue flashing lights and loud sirens provided the most effective way to clear traffic on the highway to enable a head of state get to the venue on time. POURING RAIN The pouring rain only made the situation worse as traffic was clogged.

President Uhuru, however, managed to make it to the venue in time despite the hiccup. President Barack Obama was greeted with a rapturous ovation when he arrived around an hour late at the FNB Stadium to pay tribute to the former South African leader.

Pictures showed Mr Obamaâ€™s motorcade stuck in long queues of traffic as he made his way from Pretoria where Air Force One landed to Johannesburg for the ceremony. It is perhaps this delay that resulted in the two leaders coincidentally sitting near each other and shaking hands.

Kenyaâ€™s High Commissioner to South Africa Patrick Wamoto told The Standard from his Pretoria office that the South African head of protocol had â€œprofusely apologised for the incidentâ€. Ambassador Wamoto told The Standard yesterday that there was no specific designated or reserved seats on the dais and heads of states were sat by protocol as they arrived. It appeared, therefore, that it was purely based on coincidence that President Kenyatta found himself very close to US President Barack Obama and even shook hands with him.

He said he was willing to go to Qunu to represent the President but had been advised by the South African Government that attendance was purely by special invitation, which he had not received and was therefore unlikely to attend the graveside ceremony. He says the South African Government had urged diplomats to encourage their heads of states to attend the FNB Stadium service because the ceremony in Qunu was likely to be private and restricted to the late Mandelaâ€™s kin and special guests. Plans for celebrations by Kenyans in South Africa to mark Kenya@50 were cancelled on Monday to honor Mandela. Kenyaâ€™s High Commissioner in South Africa Patrick Wamoto said celebrations that included a gathering of Kenyans at a park in Pretoria had been cancelled.