As the Senate session to impeach outgoing Kiambu Governor Ferdinand Waititu ensued, one allegation against him stood out, attracting ridicule from a number of senators.

Waititu was accused of grabbing land from a widow, since identified as Cecilia Mbugua, and gave it to his ‘woman’ as reported by Daily Nation on Friday, January 31.

Leading up the impeachment, representatives from the Kiambu County Assembly had accused the ousted governor of the illicit transfer of a parcel of land, 0.135 hectares in January 2018 to one Esther Wamuyu Nyatu, who the ward reps alleged was Waititu’s wife.

According to the publication, an investigation in Thika Town by the ombudsman revealed that Cecilia had been threatened and coerced into transferring her land to Esther.

Cecilia, who owns five plots in Thika Town had sought county approval in 2013 to develop the land, though she was initially given the go-ahead, the approval was later annulled after officials from the county alleged that the land belonged to Thika Jua Kali Association, despite her having the title deed.

She met Waititu in December 2017, then newly elected, where she was assured of permission to develop the property on condition that she surrenders two plots. The publication reported that the widow was forced to settle on the terms.

An investigation by the ombudsman allegedly revealed that there was not a single trail of bank slips or land sale agreements that had been drawn as proof of how Esther Nyatu came into possession of the two plots.

When interrogated by the commission, Waititu conceded to having facilitated the transaction.

“Our investigators interviewed a number of county land officials who participated in the transfer of the plots. The officers indicated that Esther Nyatu’s details, including copies of ID, KRA pin and passport photograph were given to them by the governor and that the transfer of the properties to her name was directed by the governor,”  Commission on Administrative Justice chairperson Florence Kajuju told the daily. 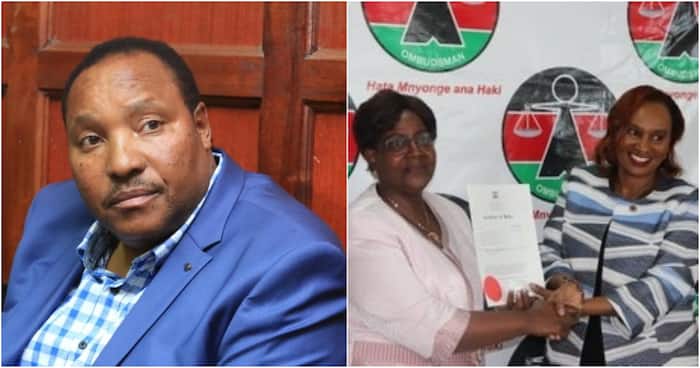 As people would expect that Cecilia Mbugua would rejoice after she won the case against Waititu, she asked Kajuju to keep the file on the land case open.

Despite getting her land back, it is reported that the widow seemed certain that more people would go after her Ksh100 million plots, which are located at the heart of Kiambu Town.

“I am not willing to ask for compensation at the moment. I still live in Kiambu County and I just want to live in peace. I do not want any more problems in the future,” Cecilia stated.

“But I would like to ask the commission to keep my file open in case I find more challenges along the way,” she added.