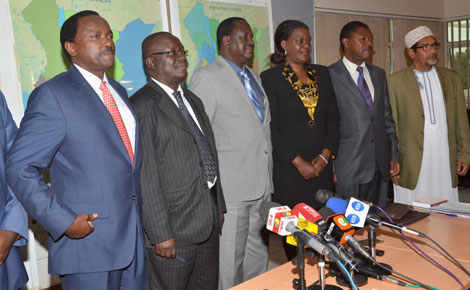 Opposition leader Raila Odinga has declared that the push for a referendum is unstoppable as the Coalition for Reforms and Democracy ( CORD) narrows down to three the issues it wants put to public vote. Raila laughed off the perception that Jubilee may unleash its tyranny of numbers to scuttle the process in Parliament, saying the crusade to change the Constitution is people-driven and funded by Kenyans of goodwill.

“When the full face of the movement is unveiled, then Kenyans shall know and those dismissive of our efforts shall be shocked at the depth and width of the feeling that the country needs an urgent rescue,” Raila said yesterday when he unveiled the coalition’s Committee of Experts (CoE) to spearhead the referendum bid. “A referendum belongs to Kenyans, those of goodwill will contribute to fund the process, ” Raila said.

Reports suggested that a key focus for CORD is the welfare of counties to broaden support. It is said CORD could frame its referendum crusade around protection of devolution by pushing for increment of counties’ share of national revenue from the current minimum of 15 per cent to 40 per cent.

Also floated is a proposal to devolve some of the security apparatus of the state to the counties. The two proposals would resonate with governors and generally the devolved governments are instrumental in the process, as a draft Bill should garner the backing of 24 counties to make it to Parliament.

CORD wants governors to have a say on security matters in their respective counties and supervise recruitment of security officers. The Opposition wants new commissioners to head the Independent Electoral and Boundaries Commission (IEBC), accusing the current team of bungling the 2013 General Election.

“We do not want to pre-empt what the CoE will come up with but certainly not everything will be in the referendum question. The committee will do its work to condense the issues to avoid ambiguity that may confuse Kenyans,” Suna East MP Junet Mohammed said as he hinted that CORD may push for the removal of IEBC before the referendum.

The referendum agenda will be driven by the “Okoa Kenya” movement unveiled by CORD with eight structured organs, which will work interdependently to champion the referendum. Yesterday, Raila said Okoa Kenya was a convention of like-minded Kenyans from all walks of life representing various sectors who are convinced that the country is at a critical turning point in its history.

Raila’s former legal aide, Paul Mwangi ,who will chair the CoE, said the organ will be guided by the 13 resolutions CORD unveiled during the Saba Saba rally, and which he said were informed by challenges Kenyans are facing. “We shall collect information by way of memorandum from Kenyans, analyse them and see how the issues can be framed. This will be a process that will ensure high level public participation and inclusivity,” said Mwangi who was the former Prime Minister’s legal advisor in the Grand Coalition Government.

Other members of the committee at the briefing were former Labour Permanent Secretary Beatrice Kituyi and Mombasa-based human rights lawyer Khelef Khalifa, while lawyer Kethi Kilonzo was reported to be appearing for a client in court. Wiper leader and former Vice President Kalonzo Musyoka, who alongside Ford-Kenya leader Moses Wetang’ula showed solidarity with Raila, said at some point the Government will have to fund the referendum. “Once Kenyans agree of the need for a referendum then the funding must come from the Consolidated Fund as provided for in the Constitution,” Kalonzo said. CORD, which has been opposed to the current presidential system, would seek the decision of Kenyans on their preference on the kind of governance they want with an aim of adopting a parliamentary system which they argue would end the notion that only big tribes can rule Kenya.

Raila said the referendum lobbying will be people-driven and inclusive. “Mahali Kenya inaenda inaweza ikazama. Ndio maana tumeanzisha Okoa Kenya. (Kenya might sink if it continues in the direction it has taken. That is why we have started Okoa Kenya,)” Raila said. Neither the National Assembly nor the Senate have the constitutional mandate to block Kenyans from making a decision on key issues affecting them. “The issues we are raising are not about Parliament or CORD.

They are issues affecting Kenyans and will be decided by Kenyans themselves. Parliament has no powers or tyranny of numbers to prevent the issues from going to Kenyans,” Raila said as he warned that no one should attempt to think that he can scuttle the referendum. “One million signatures cannot be watered down by some three hundred MPs. The referendum is inevitable for Kenyans to decide…It is unstoppable,” Raila declared yesterday. The Opposition has already unveiled its eight-structure framework for the referendum including the national council of advisers which will be the supreme organ.