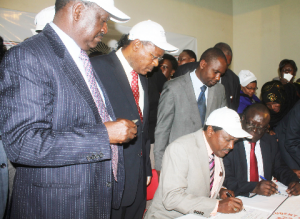 The exercise for the collection of signatures to push for a national referendum on the constitution as required by law spearheaded by the Okoa Kenya Movement and which kicked off two weeks ago has hit a 1.4 million mark.

The exercise which is coordinated by the Okoa Kenya Secretariat saw the first batch of 1,800 books distributed to Members of Parliament (Senate and National Assembly), ODM, Wiper and FORD-Kenya party officials and volunteers in the Western Kenya, Rift Valley and Nairobi regions all which have been filled with signatures.

The second batch of 2,000 books will be released this week to delegations from Coast, Eastern, Central and North Eastern regions for the electorate to append their signatures.