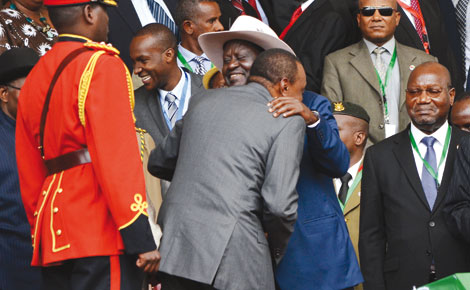 The CORD leader said as an opposition, â€œwe celebrate not because things have gone so well but because the country has held itself together this far despite many trials.â€

Raila, who served as Prime Minister between 2008 and 2013 in the coalition government, gave a harsh assessment of past three governments and pointed out worrying trends under President Uhuru Kenyattaâ€™s administration eight months in office.

â€œNow we are under Jubilee and its actions, particularly attacks on media freedom get me very, very worried and they remind me of the words of President Reagan in which he said: â€œFreedom is never more than one generation away from extinction. It must be fought for, protected, and handed on for them to do the same, or one day we will spend our sunset years telling our children and our childrenâ€™s children what it was once like in the United States where men were free.â€

Raila added: â€œWe are not raising alarm just to oppose Jubilee. We are raising questions about attacks on media, the Judiciary and NGOs because we have been here long enough to see when danger is coming. Kenyans should heed the words of Reagan, which is also our counsel.â€

He cited poor governance in the preceding two governments before President Kenyattaâ€™s administration.

â€œKenya is here in spite of the leadership we have had over the years. The first presidency wallowed in money in the form of foreign aid lavished upon us by the West to fight Communism. We have nothing to show for it,â€ Raila said as the crowd cheered.

He also took a swipe at the Moi administration which he served in towards the end as minister when Moiâ€™s Kanu merged with his National Development Party. Raila said Kibakiâ€™s government managed to undo wrongs done by the previous government.

â€œThe Second presidency pushed us to the brink. The third presidency pulled us back from the brink but shot itself in the foot by failing to tackle tribalism,â€ Raila said