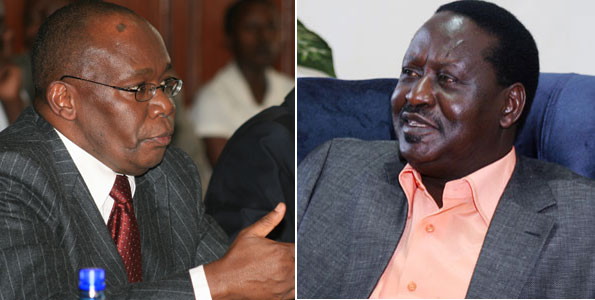 First is that Sanctions are coming; Thanks to reckless campaign rhetoric by Jubilee, Obama has warned US journalists that Kenya is not secure for American journalists. What he is saying in Security speak, is that he cannot guarantee their security. And he acts mostly based on intelligence briefings.

Prime Minister Raila Odinga has dismissed a directive to Ministers and Assistant Ministers who were elected on the 4th of march to resign before taking up new jobs.

In a press statement, the PM said that there were no provisions requiring Ministers to quit in the manner stated by Head of the Public Service through the government spokesman yesterday.

He stated that â€œthe status and tenure of the President, the Prime Minister the Vice President, Cabinet Ministers and assistant ministers are governed by section 12 of the sixth schedule of the constitution and the National Reconciliation Actâ€.

Mr. Odinga said the Attorney General had rightly indicated earlier that the President ,the Prime Minister, the Vice President ,cabinet Ministerâ€™s remain in office until the assumption of office by the duly elected President and Cabinet Secretaries .

â€˜â€™The purported directive on this matter from the Head of the Public service has therefore no constitutional or legal foundation. It is misleading and inaccurate and should be disregardedâ€™â€™, he said.

The PM pointed out that in line with the AGs interpretation, the President and Cabinet which includes the Prime Minister and the Vice President are in office as a caretaker government and are only exercising executive power during a temporary incumbency.

â€˜â€™It should be noted that the incumbent as caretaker President, amongst other things cannot nominate or appoint or dismiss Ministers and the State or public Officersâ€™â€™ posed, Mr. Odinga.

He added that the statement of the Head of Public Service can only be relevant in respect of Cabinet Secretaries appointed after the general election.

Mr. Odinga pointed out the Grand Coalition government was still intact and in place led by the two principals; the President and Prime Minister.

â€˜â€™The coalition government at the level of the President, Prime Minister, Vice President and Ministers will stand dissolved when the duly elected President following the first general elections under the new constitution takes the oath of officeâ€™â€™,he explained