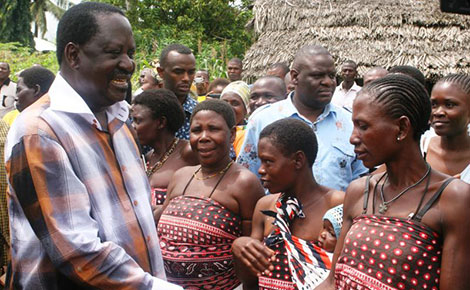 KILIFI COUNTY: Coalition for Reforms and Democracy leader Raila Odinga has said the push for the referendum is unstoppable despite its dismissal by President Uhuru Kenyatta as an avenue for wasting public money. Addressing mourners in Kilifi Saturday, Raila said the referendum would ensure enough money goes to the counties and that the expenditure is protected by the Constitution.

He said one of the issues that will be subjected to the referendum is how the thorny land issue and other historical injustices should be handled. â€œWhen I came back from the US, I got so many complaints about the rising cost of living, insecurity and poverty. We called for a national dialogue but those from the other side refused to talk. We are now seeking a referendum and it is unstoppable because it is the will of the people, who have the sovereign power,â€ said Raila at Rabai in Kilifi County, where he attended the burial of Mzee Pekeshe Ndenje.

He said the Jubilee Coalition cannot be trusted to solve the land crisis at the Coast, alleging that many in Government had benefited from historical injustices in the region. This was the first time Raila was returning to the region since the presidentâ€™s revocation of title deeds in Lamu. Raila came face-to-face with some ODM rebel MPs, led by Kilifi Northâ€™s Gideon Mungâ€™aro, Kwale County MP Zainab Chidzuga and Suleiman Dori of Msambweni.

Raila said the Constitution bestowed sovereign power on Kenyans to chart their destiny, adding that the Jubilee government was to blame for the choice of referendum after rebuffing the Oppositionâ€™s call for national dialogue earlier this year.

The former Prime Minister said Kenyans were pessimistic about the State-led land reforms, as â€œmany of those behind the land historical injustices are serving in the current governmentâ€. â€œNi kama vile watu wanafukuza mwizi akifika kwa kona anageuka ananyoshea mutu mwingine kidole akisema â€˜mwizi!â€™ na watu wanageuka na kuanza kumkimbiza yule aliyenyoshewa kidole badala ya mwizi (it is like a thief being chased and once he has turned a corner he points a finger at someone else, then the wrong person is lynched).â€

Since the President revoked title deeds for 500,000 land parcels in Lamu, the Jubilee side has in the last week exuded confidence that it would drive the much-need reforms in the sector.

The Opposition has, however, opposed the State-led move, saying the President has usurped the powers of the National Land Commission (NLC), which is mandated by the Constitution to revoke or issue title deeds. Raila, who for the first time came face to face with Coast CORD rebel leaders, also dismissed calls for Coast unity. â€œWe canâ€™t allow people who have joined the other team to score goals into our net. They should join the other team and we are ready to face them. What is this Coast unity? We should talk of national unity. We should not allow tribalism in our regions,â€ he said. Warning ignored

The turf war pitting rebels against those supporting the former Prime Minister played out at the burial despite calls by Mijikenda leaders and family members that the deceased had directed that no one should discuss politics during his burial.

This was in apparent reference to Mombasa governor Hassan Ali Joho, who they blame for the ouster of Mungâ€™aro as Oppositionâ€™s whip. Ms Lay claimed that some Coast leaders had been bought to oppose the will of people in the region and asked the electorate to be cautious. Mzee Pekeshe, who was later baptised Moses Abraham Denje, died on August 2 aged 90 after a long battle with diabetes and blood pressure, which had led to the amputation of his left leg. He left behind a window, Sidi Chideje, 17 children and 61 grandchildren.