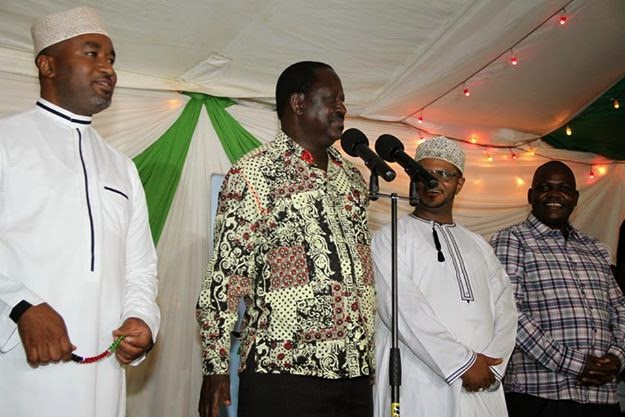 Changamwe MP Omar Mwinyi has confirmed the obvious that Coast supports the push for the referendum because residents want land reforms and allocation of more resources to county governments.

â€œThe CORD team at the Coast is ready for the referendum vote because we want our land protected from grabbers and more resources made available to the counties,â€ he said. Since the battle will be fought at county assemblies which will determine whether or not the threshold of support for a referendum is adequate, the support of MCAs will likely tilt the vote.

To begin with in Mombasa County, the nerve centre of Coast politics, all 45 MCAs belong to ODM. They include 30 elected members and 15 nominated ones.

ODM enjoys massive support in Kilifi County where it boasts 51 of 53 MCAs. Jubilee and Amani coalitions have one member each. Governor Amason Kingi is said to have a major say at the county assembly and could sway the vote despite rebellion within CORD led by Jubilee apologists MP Gediod Mungâ€™aro. so in Kilifi it is case closed !

In Kwale, CORD has 11 MCAs, 10 of them from ODM. Jubilee has 13 while Amani coalition has eight. CORD has already successfully secured the support of UDFâ€™s eight MCAs and those from other fringe parties like the Kenya National Congress (KNC) and Kadu Asili, which has three MCAs. Even those pro-Jubilee MCAs have indicated that they would support efforts to increase the financial allocation to counties. So again in Kwale its case closed !

In Taita Taveta, CORD has 22 MCAs out of 35. The assembly has 15 nominated members, mostly from the Opposition coalition. Most MPs in the region support CORD and the issue of empowering the National Land Commission (NLC) will resonate well with many MCAs in a region where most residents are squatters. Again, another case closed !

It is a mixed bag for CORD in Lamu, a county which has 20 elected members and 10 nominated ward representatives. ODM has four members, UDF in which Governor Issa Timamy belongs, has three, as does Farmers Party and Safina. TNA and New Democrats have two members each while United Party of Kenya (UPK) and Alliance Party of Kenya (APK) have each one member. â€œThe house is a mix of members from different political parties,â€ said speaker Mohamed Hashim.

The assembly has in the past leaned towards Jubilee, but recent insecurity and the arrest of the governor has soured relations and sparked ethnic divisions. This assembly is open for persuasion and Jubilee is reported to be working tirelessly to carry the day there but still a long shot ! here it is a case partially closed

In Tana River County, there are 26 MCAs. Cord has eight elected members while Jubilee has three. CORD has the majority of the 15 nominated MCAs and therefore CASE CLOSED !

Kwale Governor and Vice Chairman of the Council of Governors Salim Mvurya has declared his support for the referendum fronted by governors, saying it is non-partisan issue.

â€œWe are driving our referendum agenda in a non-partisan manner. We are asking for support from all regardless of whether they are CORD or Jubilee supporters. The Council of Governors has met representatives of MCAs and the Speakersâ€™ Forum in Nairobi for joint consultations and they fully support our agenda,â€ Mvurya said.

The governorsâ€™ focus is on increased funding for devolution, strengthening of the Senate, land reforms and improved management of security. They also want the MCAs given similar privileges as MPs. Analysts say the referendum will be influenced more by politics than ideology. â€œThe referendum is more about politics than on issues. The outcome will depend on the leadership of a certain region. But the governors and MCAs have more sway than MPs because they are always on the ground,â€ said Dr Owen Baya

â€œDevolution has disappointed the people of Coast because funds are still being controlled by the central government. The people prefer a federal structure which provides for self-determination,â€