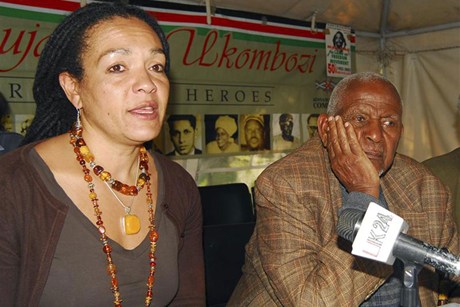 By: Kenya Today team in Nairobi.

CORD presidential candidate got a very important endorsement today from the liberationÂ veterans; the lobby â€œWazalendo na Railaâ€ comprising of former freedom fighters and their relatives has vowed to support the candidature of Raila Odinga, citing his reform credentials as what informs their decision.

They further dismissed claims that Raila is too old to be the country’s fourth president, adding that he has been busy serving Kenyans. They are also calling on Kenyans to uphold the spirit of democracy and not victimize each other over political inclinations as has been the case in previous elections.

Here below is a statement issued by the veterans to all news rooms.

We have called you here today to state our reasons for supporting the presidential candidacy of a comrade in the struggle, Prime Minister Raila Amolo Odinga. They are reasons we have formulated after careful evaluation of the candidate, which has involved scrutinizing all his weaknesses (as well elaborated by his worthy opponents) and weighing them against his strengths (that we probably know better).

This lobby, that is made up of persons who participated in the struggle for the freedom we enjoy in Kenya today or the relatives of such persons, has listed down the reasons for supporting the candidate as follows:

1. In and out of power, the PM has consistently proved the person best able to articulate the aspirations and defend the rights of Wanjiku, the ordinary Kenyan who has persistently been oppressed, suppressed and persecuted by a government system first created upon arrival of the colonialist in Kenya at close of the 19th Century. Out of power, the PM spent nine of the best years of his youth languishing in political imprisonment for refusing to support the oppression of Kenyans and demanding a guarantee for the rights of all to live in the dignity and prosperity we all deserve as citizens of a free nation.

2. In power, the PM has demonstrated true statesmanship in difficult circumstances and, for instance, proved many wrong who predicted a collapse of the Grand Coalition Government. He provided the tolerance and level-headedness required for the Coalition to survive. At the same time, he stood firm when he was called upon to protect the rights of Kenyans. This is exemplified by his steering of the struggle for the new constitution. The latest action in this line is his refusal to support the Retirement Benefits Bill and to stop thieves using parliament to raid public coffers dead on their tracks.

3. The PM has assisted in the rehabilitation of neglected freedom fighters and their families by his regular visits, support and giving them a ready audience. This has resulted in the government building decent homes, providing employment, paying medical and funeral bills and other forms of support. The families of freedom fighters with us here can give live testimonies of support by the PM. The forms and instances of support are too many to list in this press statement. The PM was instrumental in the legitimization of Mau Mau that had remained a banned and criminal organization since the colonial days.

4. The PM has effectively demonstrated his capacity to work with people across the ethnic, regional, religious and even ideological divide for the nationâ€™s good. He, like Jaramogi Oginga Odinga his father, has shown he is ready to sacrifice his political ambitions for the common good by helping leaders from other ethnicities and regions rise to power. For the sake of Kenyan youth who may not know this historical fact, Jaramogi Oginga Odinga refused to take power at independence and demanded first the release of Jomo Kenyatta from colonial political imprisonment. He then proceeded to successfully support Kenyatta for the presidency. Likewise, the PM proposed and successfully supported Mwai Kibaki for the presidential bid in the then popular National Rainbow Coalition (NARC) in 2002. His ability to work across the ideological divide brought him to work with other Kenyan leaders (including Daniel arap Moi, which ended with the implosion within KANU when Moi chose Uhuru Kenyatta as his preferred successor for president in 2002). The older ones among us remember that it was also Jaramogi who called Mr. Mwai Kibaki from his teaching job at Makerere University in Uganda to come and be the Executive Officer of KANU and the rest is history.

5. We have listened to the demands of the PMâ€™s worthy opponents for him to retire with President Kibaki because he is allegedly too old, has been in power long enough with little to show for it. We concede that the PM is certainly not a youth. He aged in Kenyan jails, paying for his democratic agitation for our freedom. He aged in the opposition trenches, fighting tyranny. He aged fighting for the constitution that ushered in a new era of democratic freedoms for us and posterity. He aged in government working with President Kibaki and other leaders to build the highways, airports, sea ports, railway stations, schools, hospitals and power stations, fighting Al Shabab and ensuring all the other developments that are set to make Kenya a middle income nation by 2030. He aged in government acquiring skills he needs to navigate the rough waters of Kenyan politics and governance. And yet, at 68, he is not as old as our founding president, the late Jomo Kenyatta who rose to power at well over70 years of age or Mwai Kibaki who became president a 71. He is not yet as old as Nelson Mandela who became president of South Africa at 76 years. We discourage the attempts to link leadersâ€™ ages with leadership ability. Dictator Idi Amin grabbed power in Uganda at only 46 years of age. Samuel Doe did the same in Liberia at 29 years and Adolf Hitler was only 44 years when he rose to power in Germany. These youthful leaders were a disaster not only to their own people but to all humanity in the crimes they committed. Perhaps the best illustration of the meaninglessness of a leaderâ€™s age is a comparison of the performance of President Daniel arap Moi and that of his contemporary and age mate, Prime Minister Mahathir Mohammad of Malaysia. President Moi of Kenya was 53 when he took over in 1978 and ran his country down to its knees in the 24 years he ruled. Prime Minister Mahathir of Malaysia was 56 when he took over in 1981 and made his country a newly industrialized nation in the 22 years he ruled.