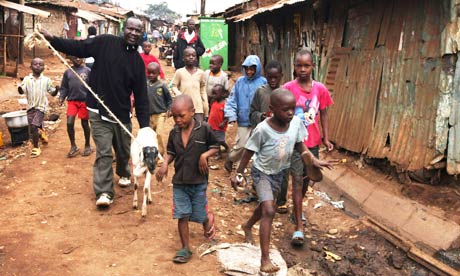 This article titled “Problems pile up in Kenya’s election year” was written by Clar Ni Chonghaile in Nairobi, for The Guardian on Monday 2nd January 2012 10.51 UTC

"Karibu Kenya, hakuna matata," â€“ Welcome to Kenya, there are no problems.

So goes the traditional greeting for visitors to east Africa’s top tourist destination.

But Kenyan wags have come up with a new version: "Karibu Kenya, hakuna matata, hakuna maji, hakuna stima, hakuna gas" â€“ Welcome to Kenya, no problems, no water, no electricity, no gas.

This sarcastic take on the well-known slogan reveals the frustration felt by many in a country that is flexing its military muscles on the regional stage, but failing to deliver on promises at home ahead of critical elections in 2012.

Kenyans will go to the polls, most likely in December, to choose a new president and parliament. The last election in 2007 brought the country to the brink of civil war amid accusations of fraud. Around 1,300 people were killed and hundreds of thousands displaced.

Few analysts are willing to take a punt on whether the 2012 polls will be disrupted by the same toxic mix of ethnicity, politics and greed. Kenya is still struggling with these old demons, but also facing new pressures.

Recent military incursion into Somalia has compounded a sense of uncertainty and insecurity.

Heavy rains have displaced thousands, ruined crops, caused power blackouts and turned Nairobi into a gridlocked quagmire. There was a shortage of water in some places and for weeks, in an unrelated scarcity, cooking gas was unavailable.

The rains and floods, coming as drought continued to bite in the north, laid bare the weaknesses of east Africa’s biggest economy, which has long been at the mercy of endemic corruption and government lassitude.

"The economy has been blinking amber all year," said Aly-Khan Satchu, an independent Nairobi-based analyst. "The current account deficit has crossed 10%, putting us on a par with Greece and Swaziland."

The World Bank has revised down growth estimates, and the Kenyan shilling sank to a record low against the dollar in October, pushing food and fuel prices higher. The central bank hiked rates repeatedly as inflation climbed to nearly 20% in November. The currency has strengthened since, but for many the damage has already been done.

Satchu says there are two economies in Kenya â€“ the old one that exists to serves the interests of a ruling elite, and a new economy based on IT and mobile technology. Overall, Kenya has shown resilience, bouncing back from the post-election crisis thanks mainly to tourism, a thriving ICT sector and the mobile money revolution.

Nairobi embodies this dual-track reality. The city where 60% of the population live in slums is also a regional hub for IT development and entrepreneurship.

Politically too, the picture is not uniformly bleak. Last year, a new constitution was ratified in a peaceful vote seen as an important first step towards eradicating the dangers of poll-related violence. But the old demons persist.

"We must continue to work towards national unity rather than balkanise our nation along ethnic lines," said the prime minister, Raila Odinga, who is the frontrunner to win the presidency.

J Peter Pham, director of the Africa Programme at the Atlantic Council in Washington, says Kenya needs strong political leadership to overcome its many hurdles this year, but that this has been in "critically low supply".

The first test will come later this month when the international criminal court rules on whether six political figures, including deputy prime minister and presidential hopeful Uhuru Kenyatta, should stand trial for their alleged roles in the post-election violence.

Former UN chief Kofi Annan, who helped mediate the 2008 peace deal, said in December that Kenyans had moved on from the past and wanted no more violence, impunity or corruption. The question is do their leaders want the same.

"I think some of the politicians are behind the curve," Annan said.