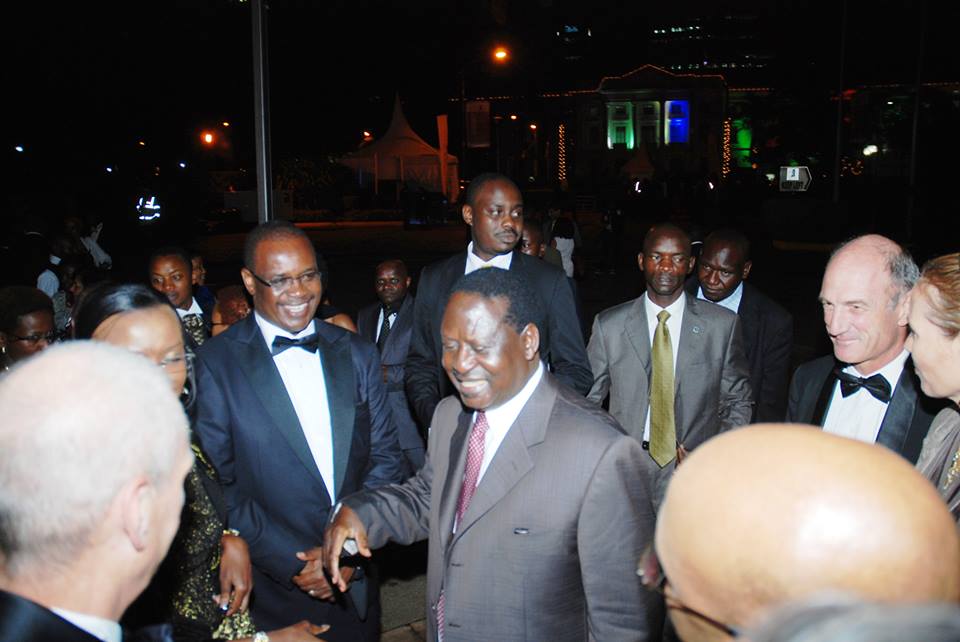 Reports of Raila walking out of Governor Kidero’s Jubilee bash are shocking. That Kidero had the people’s president seated at table number 24 a way from the VIP table is beyond comprehension.

We know Kidero is in bed with Jubilee regime BUT we expect him to handle his business dealings with Kenyatta with care and NOT mix it with public affairs especially ODM matters.

Here is the story by Nation that has made ODM party members demand that one Evans Odhiambo Kidero MUST apologize for publicly humiliating the people’s president Raila Odinga.

Former Prime Minister Raila Odinga walked out early from a party hosted by Nairobi Governor Evans Kidero on the eve of Kenyaâ€™s 50th independent anniversary in what appeared to be a protest over protocol.

Reports from people who attended the Governorâ€™s Ball on Wednesday night say Mr Odinga was kept far away from the high table and was not treated as a VIP on arrival at Kenyatta International Conference Centre, the venue of the Wednesday evening function.

Multiple sources said that when Mr Odinga arrived at the venue, he did not find any senior ranking official to receive him.

The sources said some Nairobi County Assembly members quickly took over and after receiving the former PM, led him into the ballroom, only to find no seat reserved for him either at the high table or on any of the reserved tables.

There were only six seats on the high table, for President Kenyatta and First Lady Margaret, Deputy President William Ruto and his wife Rachel and Dr Kidero and his wife.

About 30 minutes after Mr Odinga took his seat, Dr Kideroâ€™s aides seemed to have realised there was protocol hitch and quickly rearranged the high table, fixing a seat for Mr Odinga on the extreme right. Dr Kidero and his wife, Susan, sat between the President and Mr Odinga.

Former Nairobi Mayor Aladwa, who attended the bash, said: â€œThe former PM should be respected. If he is invited, he should be accorded the respect he deserves. For someone of his stature, he ought to have had his seat on the high table.

â€œIt was not a good picture. Even us, the former mayors despite having been invited, the governor did not recognise our presence, let alone introduce us.â€

Nairobi County Assembly deputy speaker Ken Ngondi, who was also present, added: â€œI guess he looked at the programme and saw that he was not among those lined up to speak, perhaps that is why he saw no need to stick around.â€

An aide to the former PM said they were concerned with the treatment that the county government was according Mr Odinga.

â€œState House is accommodating, but we do not understand why this is happening with the county. It is as if the former PM is being invited to these functions to be shown who is in charge,â€ said the official who cannot be identified discussing relations between his boss and the governor.

Contacted Frioday, Dr Kidero denied snubbing Mr Odinga, saying, he and his wife had received the former PM on arrival at KICC.

â€œIt is important to speak to the PM because people cannot purport to speak for him. In my view, there is no story hereâ€¦ It would be a lie to claim that the former PM was mistreated,â€ the governor told the Saturday Nation.

According to Dr Kidero, the former PM did not walk out in protest.

â€œWe did not have a holding room and when he (ex-PM) arrived, I received him together with my wife. The dinner was to start at 7pm, but the President came later.

â€œAfter the dinner, the former PM excused himself because he was to see off his guest, who was leaving by British Airways.
Creating falsehoods

He informed the President that he would join him later at Uhuru Gardens (for the flag-raising ceremony to mark 50 years of independence).

â€œThe PM and myself have very good relations, but it is the media which is creating falsehoods. I even talked to him this morning (Friday) and we will be together with him in Kisumu tomorrow (Saturday),â€ he added.

Mr Odinga is the leader of ODM, the party that sponsored Dr Kidero to the county leadership.

Sources at the party said that Mr Odinga left the party before the dignitaries had started speaking around 9pm.

A City Hall source said: â€œIt is true that he went away not a very happy man, my reading is that he felt he was not granted same status as that given to Mr Kenyatta and his entourage.â€

ODM sources point to an earlier incident as further evidence of Mr Odinga not enjoying due respect from the Cord-dominated Nairobi county administration.

Earlier in the week, Dr Kidero was represented by his deputy Jonathan Mueke at the opening of the Makadara Train Station where Mr Odinga was the chief guest. Dr Kidero had been listed as one of the speakers in the official programme released by the Transport ministry.

Mr Mueke explained that the Governor had to change plans after being invited to accompany President Kenyatta to another function at the National Theatre for the inauguration of refurbished work.

At the climax of the Kenya @50 celebrations at the Safaricom Stadium, Kasarani, on Thursday, Mr Ruto failed to recognise Mr Odinga and former Vice-Presidents Kalonzo Musyoka and Moody Awori, who were on the VIP dais despite saying that the day was for honouring the national heroes.

It took Nigerian President Goodluck Jonathan, an invited guest, to announce the presence of Mr Odinga who was sitting on the same row with former President Mwai Kibaki and Mr Musyoka.

Mr Ruto also failed to acknowledge the presence of former Nigerian President Olusegun Obasanjo, who had arrived earlier and taken his place with the rest of the VIPs.

â€œHe must be treated with decorum and honour by all functionaries, whether he was attending a Governorâ€™s ball or not,â€ he said.

Dr Kidero has also been accused of wavering in his commitment to the party, a charge he denies.