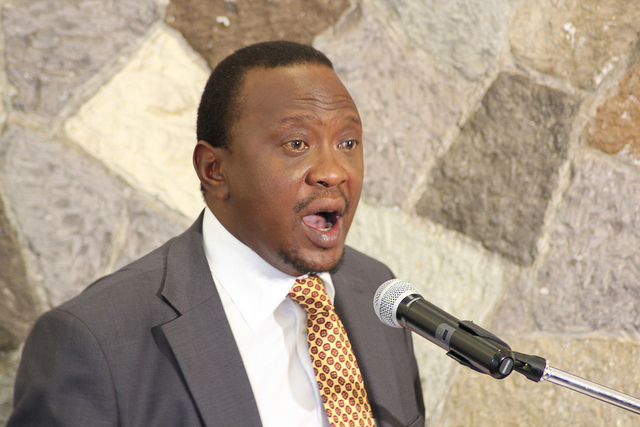 Uhuru Kenyatta will not participate in the second Presidential Debate scheduled for Monday, February 25th. In a letter to the presidential Debate Steering committee, the Jubilee campaign secretariat protested at what they term as unfairness in how the first debate was organized and moderated and that as a result candidate Uhuru will not participate.

Here below is the letter:

Letter To: The Organizing Committee, The Presidential Debate 2013

We write to commend you on successfully orchestrating the first ever Presidential Debate held in Kenya.

The Debate was broadcast simultaneously on all the countryâ€™s Television and Radio channels and it will undoubtedly and rightly come to be viewed as a seminal event in Kenyaâ€™s history.

However, we wish to register our profound disappointment that there were numerous acts of omission and commission that affected the overall tenor of the debate, particularly the moderatorsâ€™ obsession with the ICC issue vis-Â­a-Â­vis Jubilee Presidential Candidate, Hon. Uhuru Kenyatta.

It is our observation that the moderators deliberately allowed the other candidates to escape public scrutiny over various national scandals that have characterized their political careers; a number of which are even more prominent that the ICC issue.

We would have expected that after the introduction of the so-Â­called â€œelephant-Â­in-Â­the-Â­roomâ€ regarding Uhuru Kenyatta and the ICC; due focus would also have been given to equally sizeable jumbos (hard questions) touching on other candidates, including the Triton, Maize and Kazi kwa Vijana scandals involving Prime Minister Raila Odinga.

It did not escape the notice of impartial observers that when Senior Counsel Paul Muite introduced a new dimension to the ICC debate â€“ to the effect that Raila could not have escaped blame when his deputy William Ruto was being prosecuted over the same issues; moderators failed to pursue this angle further and instead they side stepped the issue entirely. Rather than putting Raila on his defense over his puzzling omission from ICC scrutiny, the moderators seemed predisposed to a set line of thinking in which they could not even entertain the idea that Raila Odinga had a case to answer regarding the ICC and Post Election Violence (PEV).

In a similar vein, it is profoundly curious that Deputy Prime Minister Musalia Mudavadi was not probed over his alleged involvement in the complex multi-Â­billion-Â­shilling Goldenberg Scandal despite his name featuring prominently in a number of Reports which were commissioned to investigate the scandal. It is equally surprising that the spotlight of scrutiny was not beamed on Kenya National Congress leader Peter Kenneth over his alleged financial improprieties while at the helm of both the KFF and Kenya-Â­Re.

Further, we respectfully submit that Martha Karuaâ€™s moral standing and self-Â­declared commitment to family values should have been scrutinized and weighed against allegations of moral impropriety and of probity, all of which are in the public domain.

Safina candidate Paul Muite should not have been let off the hook without being pressed to give a convincing explanation over the scrupulously documented allegations of him having received a Sh20 million bribe from the architect of the Goldenberg scam, Kamlesh Pattni, in the 1990s; information brought into the public domain by Pattni himself and confirmed by a senior business associate of Muiteâ€™s at the time.

For fairness to have prevailed for all the presidential candidates, Restore and Build Kenya Presidential candidate Professor James ole Kiyiapi should have been put on his defense over the misappropriation of the Free Primary and Free Day Secondary Education funds during his tenure as Permanent Secretary in the Ministry of Education.

Unfortunately, the moderators only chose to introduce the ICC â€œelephantâ€ and thereby created a stage upon which the other candidates could gang up and ruthlessly attack Uhuru Kenyatta as if they were themselves above both blame and suspicion. This was anything but a level playing field and smacked of favoritism, bias and victimization.

What followed was a total failure of moderating and fairness. The debate spun out of the moderatorsâ€™ control to the extent that the ICC issue consumed more than half-Â­an-Â­hour; while more pressing issues like Job Creation and the Economy received scant attention.

The obsession with the ICC matter took so much time of the debate that the moderators squandered an opportunity to interrogate the respective manifestoes and question the candidates on important aspects of those documents that are aimed at guiding the policies of the next government.

We are also concerned that, despite earlier agreements about the choice of pre-Â­and post-Â­debate analysts, they were picked in total breach of trust in this matter, allowing an analyst openly, serially and acutely hostile to Kenyatta to form part of this important team as detailed below.

We have outlined some of the fundamental concerns in the memorandum attached to this cover that we feel necessitate an urgent meeting between the organising committee and ourselves; where we can explain the reasons why our candidate, Uhuru Kenyatta, will not be participating in the second round of the Presidential Debate scheduled for Monday, 25th February, 2013.

We are ready to meet with your team at the earliest time possible to discuss these issues. Thank you for your time and consideration.