Senior Counsel Ahmednasir Abdullahi has claimed that the upcoming 2022 general elections will be a replay of 2002 elections that saw former President Mwai Kibaki clinch the topmost political seat.

According to the senior counsel, majority of Kenyans are now unhappy with the current government. He claims that many Kenyans feel betrayed and cheated.

Taking to his official twitter account on Sunday August 16, 2020, the controversial lawyer claimed that Kenyans are tired with the rampant corruption and theft of public resources that has dominated the current government.

He argues that there are tribal tensions, saying that President Uhuru Kenyatta will try to impose his preferred candidate to Kenyans in 2022 the same way former President the late Daniel Moi did in 2002, but Kenyans will gang together to deliver a rude shock. 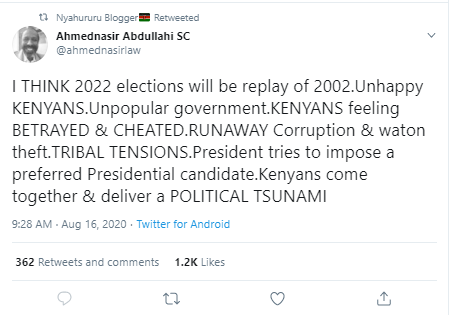 President Kenyatta in 2019 told his tribesmen that his choice for 2022 will shock many. The head of state is currently perceived to have parted ways with his deputy William Ruto, who has hence decided to walk his own journey towards 2022.