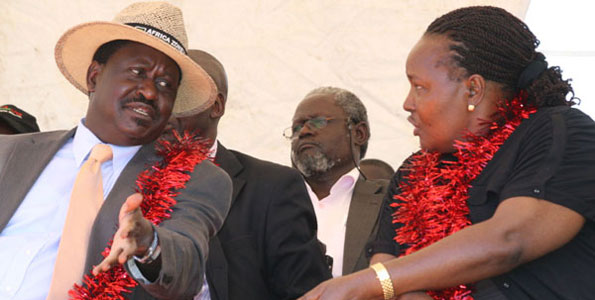 CORD Leader Raila Odinga will this weekend make his first tour of the North Rift after the March 4 elections accompanied by other CORD leaders and a host of senior Rift Valley politicians and elders, eternally raising the political temperatures to volcanic levels.

The PM has been invited on Sunday to a prayer meeting for journalist Joshua Arap Sang whose ICC case begins at the Hague a week later. On the same day, the PM will later in the afternoon address a mammoth crowd at the homecoming ceremony of Mp Wesley Korir who was elected as an Independent by the people of Cherengany in an election that humiliated Â former Ruto pointman Joshua Kuttuny.

Kuttuny is currently among the many special presidential advisors of the jubilee alliance government based in Nairobi.

The weekend meeting by PM Odinga comes at a time Rift Valley is divided over the issue of devolution, with outspoken Bomet Gov Isaac Ruto openly differing with his URP party’s stance and calling for a referendum, while the Deputy President was in Central Kenya pushing the Â national government position that a referendum is unnecessary. Kenyans will recall that it was Kipchumba Murkomen, the Senator for Elgeyo Marakwet that neighbours Cherengany, who first raised the issue of a referendum before he cowardly chickened out after the Jubilee propaganda machine accused him of a

PM Odinga, who believes increased funding of county governments must be anchored in law is seen as a huge political asset for proponents of the referendum, which he has since thrown his political energies championing. During the meeting, Odinga will most likely use the forum to engage the Kalenjin community on why the referendum is the safest way to safeguard gains made by the new constitution in distribution of the country’s national resources.

Towards elections, journalist Sang openly endorsed the PM for the country’s top seat, saying he stood the best chance to unite the country. In the 5 months since the Jubilee took over on a platform of reconciliation, the country is more divided than before elections, with both President Kenyatta and Deputy President Ruto making public appointments which reeks of tribalism in what is increasingly becoming a two-tribe government. On the other hand, sackings in the public service is been interpreted to target mostly “outsiders”, an anathema to the kind of healing and reconciliation the Jubilee candidates earlier promised.

It is on the basis of these new developments that CORD and most governors are convinced releasing more resources to counties is the surest way to mitigate over-reliance on the national government opportunities by educated Kenyans whose future is in the new Â devolved units. In a speech to lawyers a few weeks ago, the PM was categorical a referendum must be called to let the people decide on resource distribution.

The North Rift tour may just be the game-changer for William Ruto who only recently found out that all his accusers and prosecution witnesses at the ICC hail from Mt Kenya and were coached by senior officials in the Kibaki administration.