Raila Odinga-led ODM party has conducted a reshuffle of its leadership at the Nairobi County Assembly and membership at the Assembly Service Board.

The changes were communicated through a letter dated August 18, 2020, and signed by the Secretary General Edwin Sifuna and National Chairperson John Mbadi.

In order to enhance efficiency and service delivery to the people of Nairobi, the Party through the Central Committee has made changes (below) in the leadership of the City County Assembly #MbelePamoja. pic.twitter.com/FOtwGCON7P

In the changes, Embakasi MCA Michael Ogada has been appointed the new minority leader, replacing Karen MCA David Mberia. He will be deputised by nominated MCA Melab Atema, who takes over from Hospital MCA Patrick Musili of the Wiper party.

Makongeni MCA Peter Imwatok has, however, retained his position as the minority whip, same to his deputy Kilimani MCA Moses Ogeto.

A shake-up has also been conducted at the Assembly service board, with nominated MCA Catherine Okoth appointed to represent ODM at the board, replacing Nairobi West MCA Maurice Gari.

Mr Majiwa is expected to replace incumbent John Kamangu as part of an agreement between the Jubilee Party and ODM.

In the agreement, Jubilee Party was to take the Speaker’s position while the deputy’s seat goes to a candidate from the Orange party. 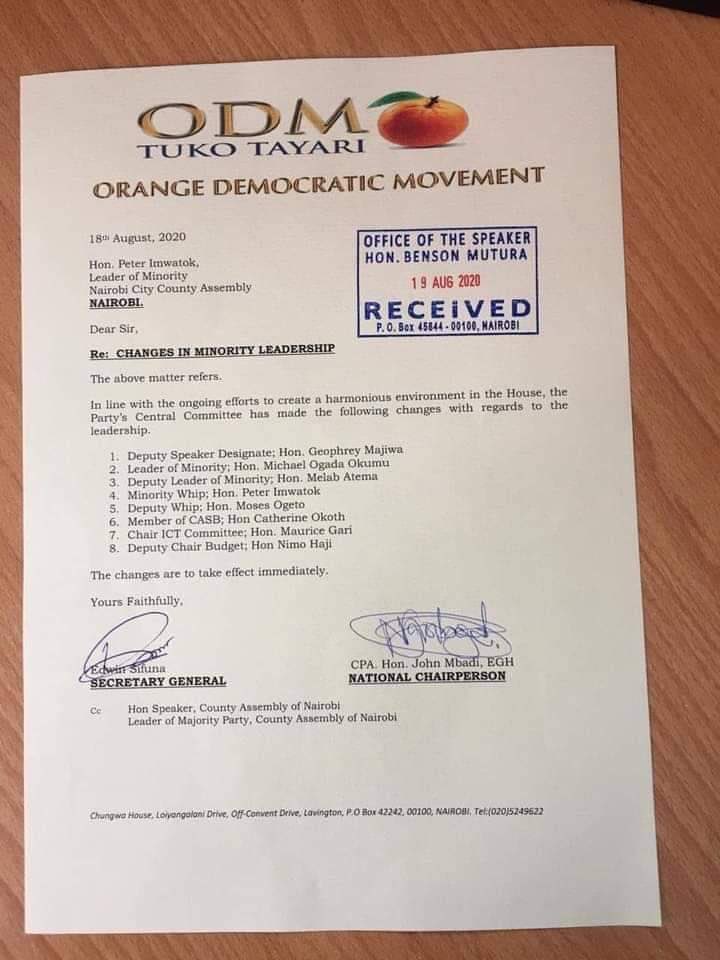