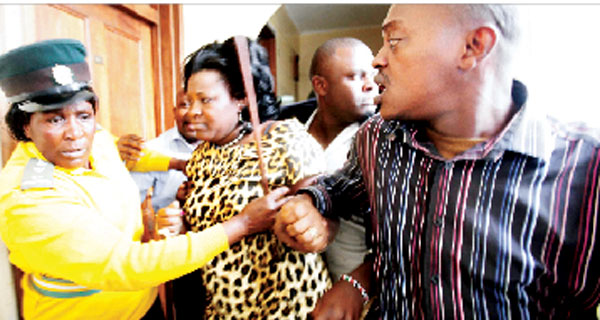 It now emerges that Nairobi Women representative who led goons to Nairobi governor H.E Evans Kidero’s office had extremely provoked the governor by hitting him just below the belt (balls). It is alleged that the governor was busy calming down the marauding Shebesh thugs when Shebesh hit the governor with her oversize knee.

“One of Kidero’s bodyguards and an aide have confirmed that #Shebesh hit Kidero’s balls with her knees. This is BAAD!! Don’t ever try hitting a man’s strongholds “

By Kidero denying that he has no recollection of slapping Shebesh, he is simply protecting Shebesh, he should tell the full story if indeed Shebesh hit him, it is obvious the good governor only reacted in self defense if at all he did slap the fat 49 year old woman from Kiambu.

Meanwhile majority of Kenyans feel nothing for hon Shebesh as she is known for her goonish character, she has had a rough past with prominent personalities, she has no decorum, she once had issues with Ida Odinga and during Uhuru’s swearing in she was allegedly thrown out of statehouse by Uhuru’s mum former first lady Mama Ngina Kenyatta.

Shebesh has been allegedly linked to a child custody tussle and involvement with a young man.

Kidero should walk tall, no apologies for that which did not happen, it is a fact if Shebesh tried storming State house with goons behind her to protest over anything she would be shot!.

Nairobi Women MP Rachael Wambui is a lady under siege. After exploiting Raila Odinga in ODM she exhibited politics of opportunism and fled to her home to sing the Tyranny of Number Clarion Song which rewarded her with the seat. She was used to hit back at her Foundation and discard her upbringing which was fondly in ODM. In the ran up to the March 4 polls she was central to the top echelons aka inner Jubilee Circle.

But as time went by she was left on the wayside for her manner less gossip which saw her one time thrown out of State House Nairobi and warned not to ever step foot there. Dejected, lonely and missing the ever green high Media profile she used to enjoy at ODM and the hey days of Jubilee she has resorted to all manner of activism to find her fast fading ebb.

That’s why she resorted to go before popularly elected Governor Dr Evans Kidero Little did she knew that her crusading unlike that of Senator Mike Sonko Mbuvi was to hit a dangerous anti climax.

Shebesh accept that Kidero rans his Government and allow him the time to do it.