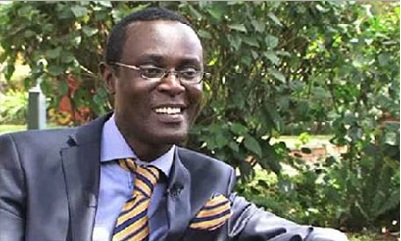 TNA political analyst he of ”Tyranny of numbers” fame, Mutahi Ngunyi is the latest to be enjoined in the mini battle to help Ababu Namwamba split Raila’s ODM party.

Speaking on K24, Ngunyi described Namwamba as the rising star in Luhyaland and Kenya as a whole who will eventually deliver the people of Mulembe to Canaanâ€¦.(hmmm, never mind this are the same words he used to describe Musalia Mudavadi when he lied to him that Uhuru was unelectable and that Kikuyu nation will support Musalia in the 2013 elections.)

Ngungi goes a head to to liken Ababu to DP William Ruto who ignored retired president Daniel Arap Moi and went on to be his own man thus the second most powerful person in Kenya at the moment.(>>> on this again Ngunyi forgets that his Project Musalia Mudavadi went on to become Mary Wambuiâ€™s UDF flagbearer and performed dismally in the general election.)

Ngunyi says that DP William Ruto knew his time was up to get out of the shadow of Moi saying Ababu too must do the same otherwise his overstay under Raila Odinga will cost him just like Musalia Mudavadi.(>>> now one wonders â€“Mudavadi left Raila and ODM , where is he now? Ukora ya Mt Kenya mafia jameni !)

Nyunyi continues to say that Namwamba has all it takes to silence Raila Odinga in Western since he has proved capable of uniting Luhyas to speak in one voice something that has never happened since time immemorial (â€¦â€¦ hmmm this sounds familiar, same shit he told us about Mudavadi in 2012/13 campaign period.)

now this is the big joke that Ngunyi rubbished Senator Moses Wetangulaâ€™s political clout in Luhyaland saying unlike Ababu Namwamba who is a self made politician Senator Wetangula is a test tube baby who has no roots on the ground and as such he can never be the de-facto Luhya leader and neither can he salvage Raila Odinga in Western now that Luhyas have begun to open their eyesâ€¦(â€¦ hmmm the last time I checked the testtube politician is Ababu and to say the least Raila is Luyha living in Luolandâ€¦..)

â€œIn all these, Namwamba will emerge as the Luhya kingpin. And for Wetangula, he just doesnâ€™t have what it takes as he is a test tube politician created by Daniel Moi and recycled by Raila Odinga. He is just a nobody in Western,â€ said Ngunyi(â€¦.. hahahaha so, who created Ruto? Uhuru? Is it not Raila and Moi?? Uongo jameni, only fools can buyâ€¦.)

Mr.Ngunyi went on to say that Kakamega Senator Bonny Khalwale is a better leader than Wetangula since he too is carving his own path politically and said Senator Khalwale and Ababu are the future leadership of mulembe people capable of uniting them and bring respect to the community since they have been a laughing stock politically for far too long.

Mulembe people is the only community from the big five who who don’t reason alike hence diminishing their bargaining powerâ€¦â€¦ so now he wants to make Khalwale feel good just because he knows the lies that got Mudavadi to madimoni centralâ€¦. Hmmmmmm and besides he wants to create two centres of power- Khalwale and Ababu- both men are financially challenged Hhahahaha
Somebody tell Ngunyi to limit his tribal ideas to mt Kenya region !