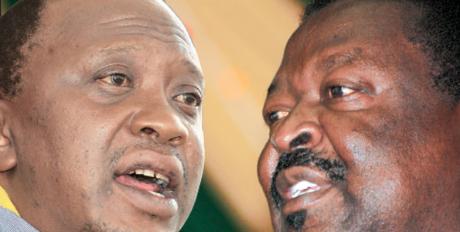 The UDF top county officials from Vihiga, Busia and Kakamega have defected from UDF/Jubilee Alliance to the CORD alliance citing mistreatment of Musalia Mudavadi by TNA leader Uhuru Kenyatta.

The officials said Uhuru Kenyatta had demonstrated bad faith in the negotiation with Musalia Mudavadi.

They demanded to know who Mr Kenyatta was referring toÂ  as dark forces (“Shetani/ or “MADIMONI”) while addressing TNA delegates on Tuesday.

They were received at the Friends of Raila lobby group offices in Nairobi.