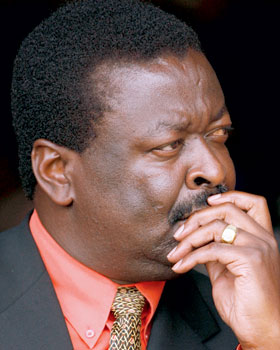 MUSALIA Mudavadi turned down an invitation by President Uhuru Kenyatta for the UDF to join him on his recent tour of Western Kenya. The President toured parts of Western last weekend and held meetings with local leaders.

But yesterday people close to Mudavadi told the Star that the former Sabatia MP is unhappy that Uhuru has not fulfilled a post- election agreement which would have seen him or his party members included in the Government.

“He is also unhappy with the manner in which the Government has dealt with Lamu Governor Issa Timamy, who is the only UDF elected governor,” said an official of UDF.

Mudavadi is one of the senior-most leaders from the region and his absence from the tour signifies the growing tension between Western and the centre.

UDF (the United Democratic Forum Party) and the Jubilee Coalition signed a post-election pact after the general election which essentially makes Mudavadi a key cog in the ruling alliance.

Mumias MP Benjamin Washiali was selected as one of the Coalition’s Whips in the National Assembly as a result of this agreement.

However, signs of the strained relations between the two sides were on display early this month when the state arrested Timamy over claims that he masterminded some of the recent killings in Mpeketoni in which 65 people died.

Timamy is the only governor elected on UDF ticket and his arrest was interpreted as an attack on the party. Mudavadi personally led the attack on the government and even threatened to review the agreements between the two parties.

“Mudavadi boycotted the tour because the Luhya have been marginalized, despite our plea that our people should be considered for senior government appointments,â€ he said.

â€œThey have ignored us and the people are telling us to keep off this government. No one from this region is in the Cabinet. We have always had a Cabinet minister since Independence and the fact that we donâ€™t have this time shows that we are not needed,â€ said Agoi accusing the Uhuru Administration of perpetuating lies.

â€œYou cannot be coming here to lie to us every other moment and expect our support. It can never happen and our Party leader is considering alternative ways away from this Jubilee Government.â€

President Uhuru was in Kakamega at the weekend, where he hosted members of the Muslim faith to the annual iftar dinner at Kakamega State Lodge.

It also emerged yesterday that anger is welling up in the region over the development projects President Uhuru commissioned during the one-day tour.

The anger is based on the fact that the three roads the President and his deputy commissioned are actually works-in-progress that were commissioned during the sunset of the Grand Coalition regime.

The Star has reliably learnt that Mudavadi was also miffed by the fact that news of the Presidential tour of Western was communicated to him by a low-ranking Jubilee functionary.

Yet the MPs who accompanied the President on the tour were mainly from Mudavadi’s own UDF. They were led by Benjamin Washiali (Mumias East), who is the Deputy Majority Whip in the National Assembly. Others were Emmanuel Wangwe (Navakholo), Evans Shinali (Ikolomani) and Yusuf Chanzu (Vihiga).

The invite for the tour was delivered to the former Deputy Prime Minister by Ali Dida, a junior TNA functionary who hails from Marsabit County. Dida was formerly an ODM supporter and once served as the deputy CEO of the party but later defected to TNA after a fallout with his then boss, Janet Ong’era.

â€œThe whole approach has been wrong. These people will never understand the psyche of the luhya people. Going to Kakamega would have been akin to selling the luhya people on the cheap,â€Said an MP known to support Mudavadi.

An aide to Mudavadi said his boss felt slighted after the President used intermediaries to inform him of the tour when he is a signatory of the post-election pact.

â€œThe President should have personally called Mudavadi to inform him of the tour because they are members of the same Coalition,â€ said a senior UDF official who however refused to be named out of respect for his boss.

The tour was snubbed by all but a few of the region’s elected leaders. During the tour the President commissioned three road projects – the Sigalagala-Butere-Sidindi Road, the Kisumu-Kakamega-Webuye road and Lurambi-Navakholo-Bungoma road.

â€œHe should stop lying to Kenyans,â€ Agoi fumed yesterday, â€œThe projects he is talking big about were started by Kibaki during the Grand Coalition, nothing new here.â€

Reuben Ombima, an ODM Nominated MCA, challenged President Uhuru to bring up new development projects in the county and stop piggy-backing on those launched by the Grand Coalition.

â€œThe three roads Uhuru supposedly commissioned were launched by Raila Odinga and Mwai Kibaki during the Grand Coalition. It is a known fact in this region. Let Uhuru initiate his own projects in Western Kenya”.