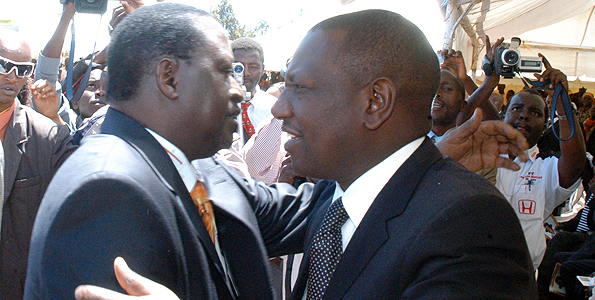 It is in this scintillating nifty fictitious childrenâ€™s story of Nyangasi, the golden, by Daniel Mwalo Jr. that I draw a suiting comparison to the man. Setting is at Chula Kanyamkago.

In the story, Nyangasi Nya Chula, a young cheerful girl is born to a subsistence family. Her tuneful soprano makes her a celebrity at sixteen years, an age when her father and mother allow boys to propose marriage to her. In proposing, the prospective suitor has a duty to compose a sweet song and sing with her. Adinda Radila is the first man to sing. He picks a renowned love song. He tries it with a borrowed skill. His tuneful soprano makes listeners think he is not a man. When both sing the song no one can notice a difference and Nyangasi dislikes it.

Then there comes Nyamgondho Wuowi, a veteran village musician. They both sit down and compose a song. It is a war song. Its tune excites Nyangasi. When she tries it she feels reborn. â€˜This is it!â€™ her spirit sprouts with refreshing shouts. It reverberates with a soothing gaiety churning within her. She is veritably thrilled. When Nyamgondho joins her in singing the song it is a precious supplement. The two will make a salient match of talents! Nyangasiâ€™s people treasure it.

As people of the village cheer in frenzy Adindaâ€™s people jeer loathsomely. They blow a damningly coarse trumpet and Nyangasi runs back into her parentsâ€™ house fearfully humming the song. She will not reemerge.

As her father and mother meditate who to consider, she begins to belch and spit in a depressed disgust. Every time she spits out it is gold. She hums Nyamgondhoâ€™s song simultaneously. When her father and mother realize it, they want to keep her but her condition deteriorates fast and she will soon die.

Then they cite Adinda and she collapses and almost dies at once. When they mention Nyamgondho, and she is well and alert. She asks her father and mother to tell her â€œthe golden songâ€ but they cannot remember it. Then she asks them; â€œWhere is Nyamgondho?â€ And they take her to him.

Nyamgondho and Nyangasi live together ever after. Their song soothes the land. As Nyangasi spits out gold, the land becomes rich and happy. Nyamgondho becomes the dream king of the rich Chula Kanyamkago.

This seems to underline the magnetic value one man has become to the politics of Kenya today.

Born on 21 December 1966 in Kamagut, Uasin Gishu, William Kipchirchir Samoei arap Ruto has famed himself as a super Kingmaker. Apart from mastering in Science, the botanist-cum-zoologist stands out as a prolific political gambler. He first did it in 1992 when he was merely twenty six years old. In that year, he teamed up with other youth to form the Youth for Kanu 1992 better known as YK92, a lobby group resuscitated Kanu giving a critically confounded then-President D.T. Moi muscles for the first multiparty race.

At 31 years of age, Ruto had fully invented and invested himself into active politics. He defeated the preferred Reuben Chesire to Eldoret North Parliamentary seat. Ruto joined Kipruto arap Kirwa and Cyrus Jirongo to rebrand Kanu by adding decisive democratic tones in the party and in parliament. He became an Assistant Minister in the Office of the President Â and later Minister for Home Affairs.

He was elected KANU director of elections in the famous Kasarani elections where the then Vice President was droped as the partyâ€™s vice chaiman, Raila Odinga Â was elected Secretary generalÂ  but could shortly bolt out of the party with other senior politicians to form LDP.

Hon. Ruto was the rock of retired President Moiâ€™s project for a successor â€“ Uhuru Kenyatta. The project however did not succeed as Raila Odinga led Kenyans electing Mwai Kibaki under the NARC coalition. It was a sound defeat and humiliation for KANU.

Hon. Ruto together with his party chairman Uhuru Kenyatta teamed up with the LDP wing of the NACK coalition to form the orange team that led Kenyans to reject the constitution draft in the 2005 referundum.Â  The Orange movement could be Rutoâ€™s launching pad to political centre stage. He quickly developed a good working relationship with Raila Odinga and he later ditched KANU to join ODM

Impressed by Rutoâ€™s talent, Raila implored Ruto to seek presidency in a strategy that was meant scuttle then favourite candidate Kalonzo Musyoka. Â In the ensuing party nominations Ruto emerged third and resolved to back the winner- Raila in his bid for presidency.

In the 2007 elections, Ruto was the bedrock of the campaign machinery that threw Kibaki off his feet before the President and his handlers rushed to shove results down the gullets of the now defunct Electoral Commission of Kenya, ECK. The rigged elections caused countrywide protests leading to post election violence with ODM zones in Rift Valley, Nairobi and Kisumu bearing highest number of causalities due to excess use of force by the police.

It is widely acknowledged that Ruto brought into the ODM party more votes and Members of Parliament than the then deputy party leader Musalia Mudavadi. It was almost natural the Ruto should have been made Deputy Prime Minister owing not only to the votes and parliamentary seats but also his effort at the Serena talks where his colleague at the talks, Hon. Mudavadi, was seen by many as a participant just for the show.

The sharing of the â€œhalf a loafâ€ in the coalition government and Rutoâ€™s perceived hot ambition might have pushed him out of ODM. Mudavadi was the preferred kid even when he only delivered just 60% of Rutoâ€™s harvest.

Even though he was appointed to the Cabinet in the coalition government, Ruto was not satisfied with the the half loaf; he expected need for more. He believed that the party was shortchanged at the Serena talks. Continued heat in the party touching on ICC cases and the Mau eviction could see Ruto resolutely work to isolate himself and flock. This left Raila weak and withered in and out of parliament. That was the time Kenyans knew that Ruto was a mighty force in the ODM. He has since been installed a Nandi elder; a peopleâ€™s resolve to give him control over them.

Hon. Ruto has declared his intention to contest for the presidency on URP ticket. Like Nyangasi, he knows what he has with him and he may keep it to himself or want to exploit it. Like Adinda, Uhuru had tried it with him using the Kanu tune that never worked for its boredom in their â€œshared tuneâ€. Yet Uhuru has shown selfishness by insisting â€œall partners must back him upâ€ and not otherwise. His ferocious campaign for Kibaki re-election in 2008 and subsequent post election violence is enough to send spines chilling. He may not be easy to work with; and if he gets the ‘treasure’, he may work to change the Constitution in order to rule without subjection to another election process. That is the way with warmongers like President Yoweri Museveni of Uganda, etc.

Again, Hon. Rutoâ€™s support base in Rift Valley cries foul of historical injustices, the emotive issue of land was listed as one of the triggers of post election violence. Any political arrangement with Uhuru Kenyatta that will make Ruto running mate is likely to be unacceptable and will most likely be met with ground propaganda that may end up scuttling Rutoâ€™s shining political career.

The Mt Kenya power brokers are not keen on any coalition with Ruto, instead they have there plan B in Musalia Mudavadi in case Uhuruâ€™s candidature is encumbered.Â  It is in this backdrop that probably Â Hon Ruto has decided to warm up to Raila Odinga and other candidates.

Uhuru may not be easy to work with; and if he gets the ‘treasure’, he may work to change the Constitution in order to rule without subjection to another election process. That is the way with warmongers like President Yoweri Museveni of Uganda, etc.

A possible clear beneficiary of the Rutoâ€™s talisman is Musalia Mudavadi. The formerâ€™s backing makes the latter tick to the nearest, and/or into, power. But it is not clear what tone Musalia ever sings. The clearer he becomes the nearer he appears. But with Musalia’s fading support base, he may not may not be one!

Now enters Nyangasiâ€™s king, Nyamgondho! Raila is the one who can sing the sweetest tune with Ruto. He is the one who has a fitting allowance for the Eldoret North MPâ€™s ambition. He has said it. He believes in it. He nurses it in his heart. He knows what the leader means to national well-being. And Ruto cannot fail to invest in this Father Figure who still regards him dearly.

Ruto and Raila have a common dream and they can work together to realize it.Â  They have tried it before. The nation knows it. It is clear what happened to them. They only need to mend the fences and work together towards the popular dream. Raila must avoid mistakes that bored the holes. A kingmaker of Rutoâ€™s caliber requires trust. With his fervor and vigor, good results are guarantee. The people of the land have said it. The leaders have heard it. The time to do it is at hand. And the nation is waiting with relieved breath.