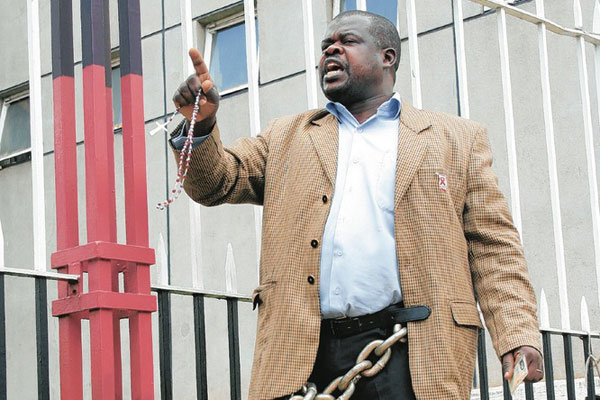 Eliud Owalo a former Campaign manager to Prime Minister Raila Odinga got a reprieve on Saturday when activist Okiya Omtatah wrote to the police demanding to know why they are linking his initiative the March Four Movement (M4M) to the alleged subversive activities.
Earlier Eliud Owalo had registered his protest to a story carried by the Saturday Standard that linked him to the M4M movement

“I have just read from today’s standard page 5 that the CID is now making new and more fictitious allegations against me, insinuating that i am coordinating a group called the march four movement.this is the theatre of the absurd. The paranoia being exhibited by the jubilee government can only be a manifestation of lack of legitimacy” Eliud posted in his Facebook page
The letter by Omtatah indirectly exonerates Eliud Owalo from any links to the movement. Eliud will again appear before officer in charge of serious crimes at the CID headquarters on Monday for further interrogation, it is widely expected that he will be escorted by thousands of CORD supporters.

Here below is the letter by Omtatah to the Kenya police, shortly we will upload all the other PDF files referred to in the letter.

Our discussion earlier today, Saturday, July 20, 2013, on the above refers.

The March 4th Movement (M4M) is an original idea and initiative of Kenyans for Justice and Development (KEJUDE) Trust. I was surprised to read on Page 5 of today’s (July 20, 2013) The Standard on Saturday, that a group by the name March Four Movement (not March Fourth Movement) is the subject of Police investigations related to alleged clandestine activities of a Mr. Eliud Owallo, which allegations Mr. Owallo has publicly denied..

M4M is a progressive and an above the board campaign aimed at amending Article 138 of the Constitution of Kenya so as to move the country from the so-called “tyranny of numbers” to the safety of numbers. M4M has no concerns about or relations to any current political formations. Our main and only concern is designing an electoral system that will eventually get the Kenyan voter to vote on policy platforms and not tribally.

Further, we have absolutely no plans to disrupt anything or to hold Egypt-style demos, and we have received no funding from any quarters, although we intend to solicit for funding from any lawful entities. Currently, we are fully dependent on a nationwide network of volunteers, who are working hard to roll out the campaign.

On April 3, 2013, we wrote a letter to the Independent Electoral and Boundaries Commission Chair (Ahmed Issack Hassan) through the Executive Officer (Mr. O. J. H. Oswago) notifying the IEBC of our popular initiative to amend Article 138 of The Constitution of Kenya, 2013.

Please, let me know ASAP, if you think there there is a relationship between the M4M and Mr. Eliud Owallo’s alleged clandestine activities under the March Four Movement.

Otherwise, be informed that M4M will be launching the signature campaign very soon, and we hope that Police will give us the support and protection we require to initiate an amendment to the Constitution of Kenya via a popular initiative. as provided for in Article 257.