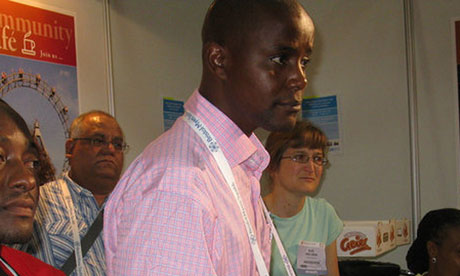 David Kuria was the first openly gay black person in Africa to run for political office outside South Africa.

It was a brave campaign against the odds that will not have a Hollywood ending. But David Kuria, forced to withdraw from elections in Kenya, has already smashed barriers as the country’s first openly gay politician.

Kuria dismayed his supporters when he announced that he could not finish the senate race because of a lack of funds to cover logistics and his personal security. He had received threatening text messages saying he would bring “a curse to the land”.

Yet, while he lost the battle, Kuria has won praise for moving the needle in a country in which homosexuality is illegal and, the UN noted last year, “largely considered to be taboo and repugnant to [the] cultural values and morality”.

The 40-year-old was the first openly gay black person in Africa to run for political office outside South Africa, according to the Kaleidoscope Trust, a non-profit organisation defending international lesbian, gay, bisexual and transgender (LGBT) rights. In the end, his push for the senate seat in Kiambu county, near the capital, Nairobi, never reached a critical mass. Declaring his withdrawal in late November, Kuria explained that his online fundraising campaign had achieved only about 4% of its target.

“It is one of the saddest decisions I have had to make during my years working as a human rights activist,” he told the Guardian. “I had seen changes in the way our people in the villages view gay people. For many people, gay people and gay rights are perceived though mediated interpretation of politicians and religious leaders. For the first time it was possible to talk with the people, answer their questions as well as point out the nexus areas of different forms of marginalisation, including poverty and other challenges that affect them, too.” There was plenty of opposition in Kenya’s conservative Christian heartlands. A cabinet minister, Moses Wetangula, warned of a revolt if Kuria was elected, saying an openly gay man should not “have an opportunity or privilege to lead a country that is founded on religious morality”.

The independent candidate was sent hostile text messages attempting to blow him off course. “The messages were largely religious in nature: they tended to have a note of desperation in them,” said Kuria. “It is like they had expected massive rejection by the people of our candidature. When that did not happen, they threatened not just me but also the people who would vote for me.

“They were of the opinion that if I continued with the campaign, I would bring ‘a curse to the land’. It sounded like it was important for them to stop this from happening.”

One of the financial burdens for Kuria was personal security, a requirement for all candidates in Kenya’s volatile political climate. “We had created a narrative of being outsiders to the political system and that narrative was beginning to build some serious traction â€“ it was even beginning to scare me somewhat,” he admitted. “Naturally, being a gay candidate, any threat could be explained of as being a homophobic attack, hence the need for added security.”

Under Kenyan law, homosexual acts are punishable by up to 14 years in jail, though police say they would have to catch someone in the act to prosecute. Denouncing gay people can be a vote winner. A 2011 survey by the Kenya Human Rights Commission found that only 18% of LGBT Kenyans had revealed their sexual orientation to their families; of these, 89% were subsequently disowned.

But during his journey, Kuria, an anti-poverty and Aids activist, gained an insight into another Kenya. “I think the narrative of Kenya being a homophobic society is taken out of context,” he said. “True, many people do not approve of same-sex relationships, but that is because of the stereotypes they have been made to believe in.

“I was getting invitations by many young families for their children’s birthday parties, or first masses for newly ordained priests in Kiambu. Far too many people would show up even when we only wanted to hold small meetings â€“ that really does not look to me like a homophobic society.”

Homosexuality is outlawed in 36 African countries, with many leading politicians describing gay people as “unafrican”. Kuria said: “Again that is one of those stories that have been told over and over again that it has come to be seen as true. But there are also very few public LGBT voices â€“ these need to increase for the narrative to be debunked.”

After the disappointment of his abortive bid, Kuria doubts that he will run for office again. “In the struggle for rights, some individuals have to make sacrifices that can not be merely compensated by the realisation of these rights,” he reflected. “It often tends to be important to know that one’s efforts are also appreciated; in my case, I expected broad-based ownership and support. It is hard to see what new thing I can do to change that situation. I just think I was not the right person for this.”

Whatever he does in the future, Kuria is already an important pioneer who made an impact, argues Ian Temple of the Kaleidoscope Trust, which invited him to speak in the UK this year.

“He’s a very inspirational and brave man who’s willing to stand up and be counted whereas generations of Kenyans have been forced to keep their heads down,” he said.

“We’re inspired by his desire to enter public life as an LGBT person in a country where to be gay is to risk being a social outcast. We understand his reasons for pulling out and we know he’s still completely committed to positive social change and access to HIV protection and treatment.”

The website David Kuria for Senator is still active. Beside a picture of the activist is a biblical quotation: “Silver or gold I do not have, but what I have I give you.”