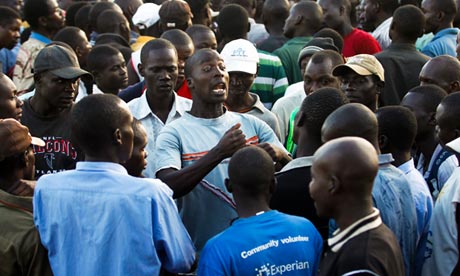 The political coalition led by Kenya‘s prime minister, Raila Odinga, said on Thursday that the vote-tallying process now under way to determine the winner of the country’s presidential election “lacks integrity” and should be stopped, and alleged that some vote results had been doctored.

The statement by the prime minister’s coalition said the counting process should be restarted using polling station documents. The election commission chairman said there was no way to doctor the results and that final presidential results would be announced late on Thursday or on Friday.

Deputy prime minister Uhuru Kenyatta had a substantial lead over Odinga by Thursday evening. Kenyatta had more than 3.1m votes while Odinga had almost 2.6m, although fewer than half of the polling stations had been tabulated.

On Monday, Kenya held its first national election since its 2007 vote sparked attacks that killed more than 1,000 people. Minor protests have cropped up since the vote, but there has been no serious rioting or ethnic violence this time.However, as time passes without a final result, tensions are rising, sparking fears that potential protests could erupt.

Odinga’s party said it continued to call for “calm, tolerance and peace,” but its call for a halt to the vote count and allegations of vote rigging could agitate its supporters. Vice president Kalonzo Musyoka, Odinga’s running mate, said the announcement “is not a call to mass action”.

Odinga’s supporters felt they had been cheated out of an election win over President Mwai Kibaki in 2007. Those supporters took to the streets, kicking off two months of clashes that, in addition to the ethnic violence, resulted in more than 400 deaths caused by police who were fighting protesters. A 2008 government report said the results were so tainted it was impossible to say who actually won.

One of the candidates must capture half the votes in order to win. Otherwise there is a runoff. Kenyatta and his running mate William Ruto face charges at the international criminal court for their alleged involvement directing postelection violence five years ago. The court announced on Thursday that the start of Kenyatta’s trial would be delayed from April until July.

Musyoka told a news conference: “We have evidence that the results we are receiving have actually been doctored.” He then listed several voting districts where he said the total votes cast exceeded the number of registered voters.

The election commission chairman, Isaak Hassan, said he had not seen any case where the total valid votes exceedsedthe number of registered voters.