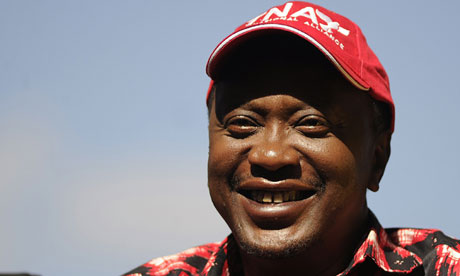 Presidential candidate Uhuru Kenyatta has promised to attend his trial for human rights abuses – just not all the time. Photograph: Simon Maina/AFP/Getty Images

The victory of Uhuru Kenyatta in Kenya‘s presidential race, if confirmed, would lead the international community into dangerously unfamiliar territory, with possibly far-reaching deleterious consequences for US and British relations with the country, UN operations and the struggle against al-Qaida-style Islamist extremism.

Along with his running mate, William Ruto, and two others, Kenyatta faces charges of crimes against humanity at the International Criminal Court (ICC) in The Hague arising from post-election violence in 2007. Legally speaking, his victory would mean that the leader of one of Africa‘s foremost states must stand trial in July for alleged wrongdoing that could result in a life sentence in a foreign jail.

Such a spectacle would inevitably be portrayed as partisan, biased, and part of the post-colonial west’s alleged wider vendetta against black Africa. Worse, it could compromise the arguably much stronger but so far stalemated ICC genocide and war crimes case against Omar al-Bashir, the president of Sudan, and possible future cases involving, for example, Syria’s Bashar al-Assad.

The US, Britain and leading figures including Kofi Annan, the former UN secretary-general, have already made clear, in a roundabout way, that Kenyatta’s victory would not be welcome. Britain has indicated officials will avoid any but essential contact with him. If London sticks to this approach, a diplomatic rift may be unavoidable.

British diplomats in Kenya have often been accused of interfering in the country’s internal affairs, going back to the time of former president Daniel Arap Moi.

Earlier this week, the Kenyatta campaign accused the British high commissioner of “shadowy, suspicious and rather animated involvement” in the election, a claim rejected by Britain. Once Kenyatta is in office, British diplomats may face a Robert Mugabe-style dilemma over whether to meet him, shake his hand, or even sit down in the same room.

The US is in a similarly awkward position. The Obama administration’s top Africa diplomat, Johnnie Carson, warned pointedly before the poll that “choices have consequences”, a comment widely seen as a recommendation that voters back Kenyatta’s opponent, Raila Odinga.

“This is going to pose a very awkward situation,” Jendayi Frazer, a former assistant secretary of state for African affairs, told the New York Times. “Kenyatta knows he needs the United States, and the United States knows it needs Kenya.”

Vital American interests include Kenyan cooperation in the fight against al-Qaida affiliates that have mounted attacks on western targets in Nairobi, Mombasa and in neighbouring Somalia.

Kenya’s assistance and leadership is seen as crucial in the battle against Indian Ocean piracy and in tackling regional problems including violence and mass displacement in the Democratic Republic of Congo. The UN, which created the ICC, relies on bases in Kenya from which to help run big trans-national operations across the continent.

Open confrontation may yet be avoided. Already the ICC has agreed to postpone the trial, at the defence’s request, from April to July. Further delays and postponements are entirely possible, especially since the defence claims crucial witness evidence has been undercut. And whatever the US and Britain do, most countries, most importantly China, can be expected to turn a blind eye.

Kenyatta has been clever, too. He has pledged to attend his trial, though not continually â€“ a legal novelty for the ICC. As a result, so far at least, he has not been detained and arraigned like others, such as Slobodan MiloÅ¡eviÄ‡, the late Yugoslav strongman. And the chief prosecutor has indicated that the trial, once it starts, could drag on for years. The only conviction the ICC has secured so far, of Congolese warlord Thomas Lubanga, took six years.

On this basis, Kenyatta could be running for re-election before his trial is anywhere near finished.