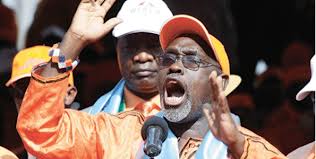 CORD Campaign team has raised concerns on the credibility of the results streamed on live TV from the IEBC national tallying centre at Bomas of Kenya.

Bettâ€™s concerns sets the stage for contesting of the results if the CORD concerns are not resolved.

By the time of going to press IEBC, Safaricom and Political Party ICT officials were reported to be in a crisis meeting to discuss the crash of the server and possible remedy.

IEBC is yet to respond to the concerns raised.