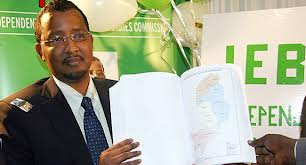 BY Lydia Matata for the Nairobi Star Newspaper

A three judge bench appointed by Chief Justice Willy Mutunga will today hear arguements from an non-governmental organization seeking to stop the tallying and announcing of the presidential results by the Independent Electoral and Boundaries Commission.

The Africa Centre for Open Governance is suing the IEBC and its chairman Isaack Hassan saying the tallying process has irregularities.
Gladwell Otieno, the organizationâ€™s Executive Director Â said in a statement released last night that vote tallying should be stopped until grievances raised by political parties are heard and a credible, transparent and fair process is instituted.

The group filed a suit early this morning and the case was referred to the Chief Justice for direction. The three judge bench is made up of Judges Isaac Lenaola, Weldon Korir and David Majanja. The judges will also hear arguments from the IEBC legal team