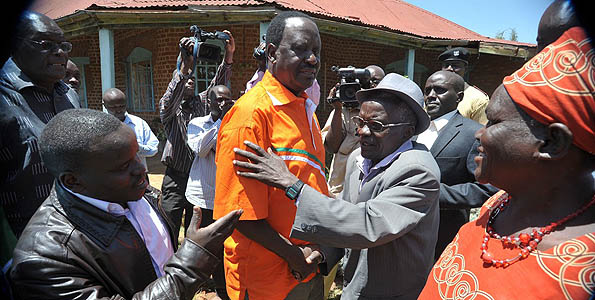 Raw information reaching us indicate that Deputy President William Ruto’s supporters are set to disrupt an event to be attended by Prime Minister Raila Odinga in Kitale tomorrow.

William Ruto’s ground troupes led by presidential adviser and former Cheranganyi MP Joshua Kuttuny have been running around the North Rift urging people not to attend the homecoming party of Mr Wesley Korir, the current MP for Cheranganyi and the prayer service of Mr Joshua arap Sang because the two have invited Raila Odinga to the events.
The two events are to be held on Sunday.

It can now be confirmed that security and intelligence officers in the area have directly told Hon Korir that Kuttuny is paying people to boycott the events or to boo Raila.

But the officers are doing nothing against it. Instead they want the organisers to cancel the events.

Hon Korir has vowed to go ahead with the event as scheduled and urged the police to ensure security is guaranteed. Hon Korrir is said to be confident non of his constituents will engage in booing, he urged the police to watch out for goons that are being mobilized from neighbouring county.

It cannot be confirmed if deputy president is privy to the schemes by his supporters. Hon Korir trounced Kuttunny in the March 4th general election.

It will be embarrasing for deputy president William Ruto if any acts of hooligans will be witnessed in his backyard owing to his call for political tolerance. Hope nobody cries!

Meanwhile area residents have vowed to attend the rallies in large number,

“we are not working tommorow, it is Raila Day in Kitale, hata kazi ya shamba tumefunga leo, kesho tuko tayari a resident Geoffrey Chemorei told this reporter.

“Kesho ni siku ya baba, they rigged his votes here, we have not forgotten, Kuttuny got more votes than Uhuru BUT you know what was announced, we are still supporting Prime Minister Arap Mibey especially on his call for maximum devolution” Welsey Kipkorir a primary school teacher in area was quoted.