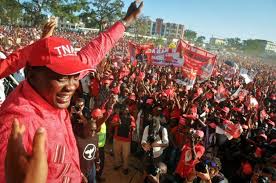 Jubilee alliance internal wrangles seemed to deepen ahead of the tomorrowâ€™s general election. The final submission rally that was meant to give the party momentum to the finish line ended in controversy when Uhuru Kenyatta acknowledged only those candidates running on his TNA ticket while ignoring those contesting on URP for various seats in Nairobi.

â€œThis is yet another mistake by Uhuru. How could he only introduce TNA candidates all of whom who happen to come from his tribe and ignore the URP nominees? What kind of coalition is this?â€ wondered a leading URP stalwart in Nairobi who requested anonymity.

Of interest is the Langata parliamentary seat that was said to have been zoned off for a URP candidate in the TNA/URP negotiations. After the rally, URP candidates for various Nairobi seats met at Laico Regencyâ€™s summit restaurant and as the number increased, the venue was changed to Rangers Walk.

Some of the candidates expressed disappointment at Uhuruâ€™s move and vowed to mobilize their supporters to vote for CORDâ€™s Raila Odinga.

The controversy is set to deepen as Jimnah Mbaru is expected to switch his support to CORDâ€™s Raila Odinga after he was publicly humiliated by Uhuru at yesterdayâ€™s rally. Uhuru labeled Mbaru a spoiler, calling on him to step down for Clifford Waititu.

Ealier, Nakuru URP candidates had pleaded their concerns regarding a dishonored MoU for the zoning of electoral areas as per party strengths. TNA is accused of fielding candidates in areas reserved for URP, a move that will CORD candidates an advantage as Jubilee votes will be split.

â€˜I wonder who advises Uhuru. You donâ€™t introduce a one-tribe list of candidates for all the constituencies in cosmopolitan city like Nairobi and Nakuru. That is naivety and display of arroganceâ€, Nicholas Ngeno, a Jubilee stalwart in Nairobi noted.

â€œWhat will other Kenyans think when you have Kikuyu candidates in areas where other tribes are dominant, yet we have candidates in URP, Ford People, Mbus, GNU and other affiliate parties?â€ Ngeno added.

The last three weeks have seen a downward spiral of Jubilee fortunes. Jubileeâ€™s image as a national party has suffered massive damage due tactical mistakes by Uhuruâ€™s handlers. Â It started when Uhuruâ€™s first cousin Hon Beth Mugo gave an empty promise of land to the landless in Taita Taveta, a move that backfired as squatters turned against Uhuru calling him a perpetual liar. This was not the first time he had given and failed to fulfill such a promise.

Uhuruâ€™s family is said to have prevailed on Grace Nyachae who comes from Mathira to implore Mzee Nyachae to endorse Uhuru. Despite massive mobilization, the rally at Gusii stadium was poorly attended.

The serial drop of fortunes continued when Ruto was booed in Kuresoi, Baringo and Rongai after he asked locals to vote for his URP nominees in the area. The locals insisted they will vote for individual candidates and not party affiliation a sign that CORD had finally broke the glass sealing.

Uhuruâ€™s reckless remarks during the presidential debate on land, the now famous â€œwilling buyer, willing sellerâ€ worsened an already desperate situation on the ground, causing Kalenjin and Maasai elders to call off their support for the Jubilee candidate.

Back to Uhuru Park, the rally was 100% TNA branded, a matter that has rubbed URP candidates and supporters the wrong way and sending a very strong negative signal to the electorate in the Kalenjin nation that Jubilee is a strange house where they are not welcome after putting a great effort in its set up.

Popular radio presenter Joshua Sangâ€™s revelations accelerated the Jubilee misfortunes in Rift Valley. By debunking the ICC myth and telling the world that his case and that of Ruto was a set up by the Kibaki side of government and nothing to do with Raila he effectively killed the very foundation of Jubilee coalition.

Polling stations open tomorrow morning, with less than 16 hours to go, it will take a miracle to turn Jubilee misfortunes in Kalenjin, Nairobi and at the Coast.