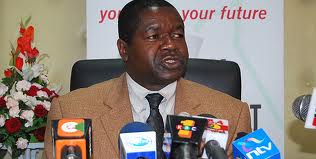 IEBC Chief Executive Officer who has been missing in action for days is back, James Oswago addressed a press briefing at the national tallying centre- Bomas of Kenya where where he dispelled fears that he had been kidnapped by “dark forces” over what many in social media had speculated to be his unwillingness to co operate with dark forces in announcing doctored results.

Oswago announced that IEBC will audit results of the presidential contest after errors and missed entries were discovered in the official tally. The audit will definitely delay the pronouncement of the official presidential resultsÂ  that was expected on Friday evening. Results from each of the 290 constituencies will be audited and verified.

Chief Executive Officer of the commission Mr James Oswago told a media briefing that the audit will be conducted before the final tabulation can be used to declare the final election results.

â€œThere may have been errors and discrepancies here and there; some we have already detected and we are working on them,â€ said Mr Oswago.

The Coalition for Reforms and Democracy (CORD) had complained that the commission had failed to include results from 11 constituencies in its final tally.

The constituencies whose results the coalition claimed had been left out of the tabulated results include Kitui South, Kubuachai, Changamwe, Kanduyi, Homa Bay ,Ganze ,Vihiga, Khamisi, Magarini, Kitutu Chache, and Mumias East.

Mr Odinga had garnered 281,611 votes in the 11 constituencies while Mr Kenyatta had garnered 25,863. The results had initially not been captured in the tallying screen.

If included in the final tally Mr Odinga could narrow the gap with his main rival Uhuru Kenyatta.

Cord had earlier written to the IEBC chairman drawing his attention to the anomaly, but attempts to engage him flopped as security officers blocked agents from accessing him.

â€œThe most important is to put in place mechanisms where if mistakes occur they can be detected and dealt with,â€ Mr Oswago said.

Major discrepancies had also been detected after it emerged that the total number of votes cast for each candidate and the rejected votes were more than the votes registered as votes cast.

IEBC chairman Mr Ahmed Issack immediately called a meeting with chief agents of the Presidential candidates to discuss the concerns over tallying and relaying of results.

â€œThe Presidential agents are free to come to my office any time to discuss any problem with me. This is a transparent process and the results that we have received are credible,â€ Mr Hassan said.

Said Mr Hassan: â€œThere may have been errors but we will deal with those problems and announce the correct figures when we make the final decision.â€

Additional reporting by the Nation