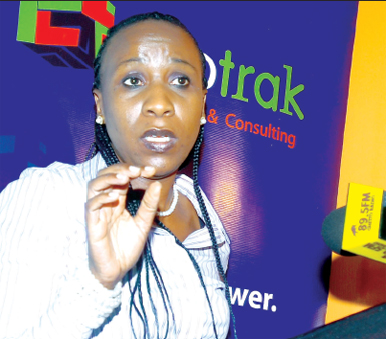 Infotrak CEO at a past event.

A response by Infotrak on allegations of favoritsm in the just released poll results; here is the full letter sent out to newsroom by the CEO and Founder of Infotrak.

With approximately 50 days to the General Election, I write to share my two cents as a political pollster.

As you may be aware, we recently released our maiden popularity poll of the year on Friday. Whilst some of you may be over the moon with the findings, I know that many of you are probably seething in anger at the fact that the numbers did not treat you too favourably.

Please believe that I empathise with you fully because like you, I hate to lose. However, I think it imperative that you all keep your eyes on the ball and appreciate that winning requires strategy and strategy is ineffective void of the pertinent tools.

Allow me to limit myself to the tool I know best which is research or poll statistics. It is often quipped that numbers are tools not rules and the skills in interpreting them require talent, not evidence in divine intervention.

Indeed, those of you who have used numbers as tools tend to excel in their political endeavours. As your campaigns hot up and pollsters continue to release opinion polls my first prayer is that you will desist from attacking the numbers and instead deem them as facts that seldom lie.

I hope you will not belabour on sideshows and awful propaganda aimed at shooting the messenger simply because you donâ€™t like the message. I urge you to remember that the poll â€œmessageâ€ emanates from the very electorate you are so keen to govern. In shunning their views you are literally saying you are not ready to listen to the people and are as such inept to lead them.

Because the numbers are tools, they are not an end unto themselves but rather a useful means to the end. That being the case, I implore you to understand that the statistics we release periodically are not static; they operate in a continuum and are liable to changes depending all your efforts.

Those of you who use the numbers to address your weaknesses and bolster your strengths often see positive traction in the numbers. However, those of you who tend to listen to your sycophants who advise you to ignore the opinion polls as incorrect often find yourselves overtaken by events.

Thirdly, it may be prudent to look at best practice on the optimisation of opinion polls. It is my belief President Barack Obama and his team perhaps possess the most superior skills in bringing numbers to life. Studying how they were able to recapture the presidency might provide useful tips on how to garner a first round win in the elections.

My mentor and friend, the Harris poll chairman states: you need to be alive to the fact that many things are important to ensure free and fair elections.

These include but are not limited to: freedom of speech and freedom to run campaigns; freedom of the Press; impartiality of the media to all candidates; government non-interference in media affairs; transparent electoral processes including registering of voters, announcing election dates; transparent vote tallying etc. Because it is unlikely all of these criteria are fully met, we need to add a ninth: that there be reliable, independent pre-election and exit polls.
It is not lost to me that opinion polls are by no means infallible. However, they are the only reliable way to measure public opinion. Knowledge of public opinion, whether well-used or misused, is far better than ignorance, and those who attack, censor, corrupt or intimidate the polls are enemies of democracy. In the coming weeks, my final prayer is that you will have confidence in the electorateâ€™s ability to decipher their own opinion.

I hope you will not insinuate that knowledge of public perception instigates violence; I trust you will not try to manipulate your voters into thinking that ignorance is bliss. As former British PM James Callaghan once wrote â€œIf you cannot trust the public with polls, you should not trust them with the voteâ€. May the best team win!

The writer is founder and CEO of Infotrak Research and Consulting