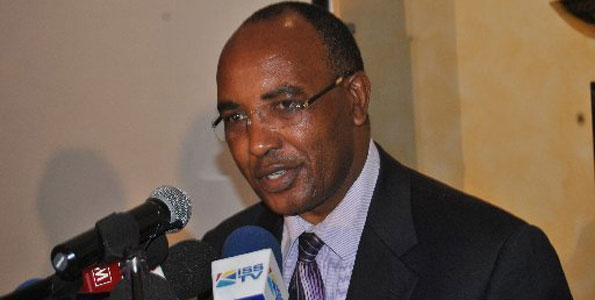 Here below is a letter sent by IEBC to top bureaucrat Francis Kimemia & co highlighting events that link him to Jubilee campaigns.

The above subject matter refers.

Please be advised that the Commission is in receipt of formal complaints from the Coalition for Reforms and Democracy (CORD) alliance of your being partisan in execution of your duties. You have been accused jointly and severally that you have violated the election laws by engaging in electoral activities against provisions of section 43(1) of the Elections Act which states as follows:

You have been accused that:

ii. On January 29, 2013 at the Bomas of Kenya, Mr. Kimemia held a meeting with District Commissioners (DCs), County Commissioners (CCs) and provincial Commissioners (PCs). In small meetings within a bigger one and that Mr. Kimemia did appeal to the administrators to assist presidential campaigns of Mr. Kenyatta as they would be sacked if Rt. Hon Raila Odinga were to be elected president.

iii. As facilitation the administrators were promised sums of between ksh 5,000,000 and ksh 15,000,000 each. This meeting was attended by Mr. Itea Iringo and Kennedy Kihara among other senior officials from the office of the President.

iv. On February 9, 2013 in the company of Iringo and Kinyua, Mr. Kimemia met about 68 elders from Muranga, Kiambu, Nakuru, Kericho and Molo at Jacaranda Hotel, Elementaita where support for Mr Kenyatta was reportedly discussed.

v. On February 10, 2013 at the same Jacaranda Hotel, Mr Kimemia met eight PCs and about 20DCs and CCs. The administrators were transported in two hired buses. They were asked to initiate door to door campaign for Mr. Kenyatta and reminded them that they would be jobless if Hon. Odinga were to win Presidential Elections.

vi. There has been partisan activities by DCs, Dos, Chiefs and their assistants and village heads in Kitui, Siaya, Vihiga, Kakamega, Uasin Gishu and Kajiado counties among others.

In respect therefor of the above very serious allegations, the Commission demands that you give us a response within 48 hours. For avoidance of doubt a copy of the complaint is hereby attached.