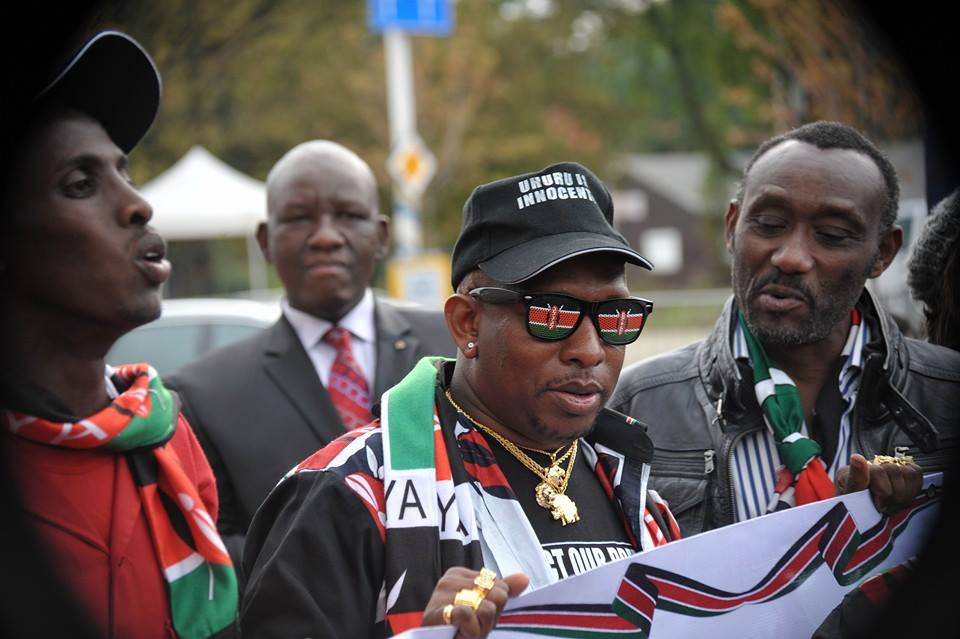 By Macharia wa Munene
In The Hague, president Uhuru was joined by thousands of Kenyans who flew in from continental Europe (Britain, Denmark, Sweden, Germany, France, Belgium and even Norway. That was big loveâ€¦ of interest to note is that they were mostly Kikuyu save for the other tribes mainly who live in Netherlands.

Senator Mike Sonko had his team of dancers or entertainers from Nairobi who clad in the national flag colours among them was the controversial Paul Kobia. Sonkoâ€™s entourage was of necessity as NO Kenyan diaspora can do what his team was doing although some joined in singing out their love for the president and open contempt for the court/ICC.

Donâ€™t forget radio sub-queen Ciku Muiruriâ€™s moment with a hot Dutch cop whom she confessed could have caused her to submit all herself to him for nothing, this is the same cop who drew a red line for senator Mike Sonko.

What captured the attention of many is the pushing and shoving whenever the president was near cameras or media. ONLY senator Mike Sonko, Kembi Gitura, General Nkaissery, hon Shaban, Hon Joyce Laboso, Charity Ngilu and Balala did NOT struggle to take photos with the president. Hon senator Kipchumba Murkomen, hon Katoo ole metito, hon Ole Sakuda and a host of MPs mostly from Mt Kenya were the shameful lot that did all they could to get close to the President, even the Diaspora Kenyans were shocked!

Hon Jimmy Angwenyi and his FORD People counterparts (hon Tongi, Hon Joel Onyancha, Hon Opore) also remained calm typical of arrogant confident Kisii men.
Katoo ole Metito and Dr Keremi Mweria and general Nkaissary had to perform extra duties of â€˜men in blackâ€™ in pushing back the masses who surged forward to greet the president and in the process, causing a near security scare, thanks God all this happened in a very low risk country.- this should NEVER be allowed to happen to in some near failed states like Uganda, Nigeria or Sudan.

Meanwhile the presidentâ€™s propaganda chief Manoah Esipisu was cool as ever and had no rest, he was everywhere near the President just performing his duties, he had to fill in his tool boys and girls back in statehouse and also the surrogates in the media houses with all the developments considering they had a lean team.

It took long for Uhuru to come out of the ICC immediately the status conference was concluded, it was drizzling outside and even started to rain hard. AND YES Murkomen, Katoo Metito, Kiuna, Ichungwa and other first time Jubilee MPs were soaked in rain outside the court as they waited to shake the presidentâ€™s hand!

And after the presidentâ€™s short address outside the court, the MPs struggled to get into the available taxis outside forcing others to take public transport to Kurhuis hotel where the president was staying.

At Kurhuis, word came from the embassy staff that all Kenyans can have lunch at a Chinese restaurant near by (yes , in line with facing the East), so all Kenyans milled there for a free lunch. Oh YES, for a diaspora Kenyan free lunch is a big deal.
The more than 40 MPs and senators assembled at the Chinese eatery with about a thousand Kenyan diaspora community, the place was packed to say the least.
So Uhuru walks in and the masses went wild, as usual President Uhuru is a free style guy/easy jamaa- almost a regular Kiambu guy, he went round the joint shaking hands with the ordinary and posed for photos with parents who had come along with kids (less than two year olds)- that was cool and love continuedâ€¦..

A place at the corner of the hotel was quickly set up for the president and again there was Uhuru pulling a surprise on his team, he demanded to be joined by some senior MPs some whom seemed not to be so interested as they could NOT push and shove the young and energetic.

We can say Uhuru knows his people! He requested (yes, loudly) the people he wanted to join him in the make shift high table; General Joseph Nkaissery, Senator Charles Keter, house speaker Joyce Laboso and Naomi Shaban and Governor Kabogo. Of course Murkomen with his juvenile energy made it to the high table but of course he sat on a rear chair at the edge of the table

The presidentâ€™s family sat the table next/adjacent, the Kenyatta family included Cousin Betty Mugo, nephew Jomo Gecaga, sister Mrs Pratt and sister Nyokabi. Other close family like First lady Magret, daughter Ngina and bro Muhoho were left behind at the Kurhuis hotel while auncle Muhoho was busy catching up with other Wazee on the other side of the hotel.

â€¦and oh, yes there was this Kenyan lady half mzungu who also doubled as a waitress at the eatery; men, she slid down two times first with drinks and later with first course round of food to the high table- Thank God Uhuru is a free style guy and so he didnâ€™t mind and of course the presidential guard were easy on situation as it was a low risk country

As lunch and soft drinks were being served a few individuals were allowed to have a word with the President- it was mostly a hand shake and they included CS Charity Ngilu, Najib Balala, Jimmy Angwenyi and Ole Sakuda, and yes the presidentâ€™s niece and her friend both whom I was told study law at Leiden University (the Dutch equivalent of Oxford university) got special access to say hi to the president.

Of course Eugene Wamalwa was very shy and was not allowed near the president (seems everybody including presidential guard knows he is jobless and inconsequential) but thank God a few villagish girls had a great moment taking photos with Eugene- this was a blessing to the mostly ignored Eugene!

At about 1600hours, all Kenyans at the Chinese eatery were fully fed, too much food was left and the president made his way outâ€¦.and just about at the main exit , the president greets a gentleman and as the crowds surged forward for a handshake the president realised he cannot have a conversation with the gentleman â€“ so he ordered ambassador Makena Muchiri to find the man and link him up (oh, I doubt if Makena did anything or will do anything, please if you are the guy -just show up at the embassy and ask Balozi makena to do the necessary)

Outside it was raining hard and as usual taxis were not enough, as the president was being forced into the taxi he again asked his men to have general Nkaissery and senator Keter join him to the hotel, due to the confusion that ensured General Nkaissery and senator Keter had already taken a walk to the hotel- again a I felt sorry for the president- it can be lonely up there!

Back at the hotel, the president went to his presidential suit where he was joined by a few family members and one or two people may have had private talks with the president.

In the hotel reception Kenyans were milling around, getting to know each other

Finally, Hon Sonko was on location and seemed not be bothered at all, he was the most sought after politician by the diaspora community and he obliged to tens who requested a photo opportunity – the super senator.

As the hotel bar was open, all present were silently welcome for drinks! many joined including MPs and other dignitaries. Sonko, Simon Mbugua, General Nkaissery, Amina Mohammed, David Mastatanga, Governor Kabogo among others.

Oh, David Mastastanga had a long conversation with CS Amina Mohammed at the hotel lobby, not sure of the content though.

Of interest was the kind of drinks many ordered- yes expensive champagne, whisks et al.

At around 1945hrs, Uhuru emerged with his aide de camp in complete official lingerie and yes all present realised he was the President again and not some Gatundu guy (after expiry of the 48 hours presidential power break)â€¦.and so again all sundry milled around him for a final hand shake and off he went to the airport.

Earlier on Senator Mike Sonko had left with together with Simeon Mbugua and a few other MPs who sneaked out of the hotel to the airport a head of the president. This am told was done by Sonkoâ€™s handlers who did NOT want the popular senator outshine his master- the president.

All other digitaries who had their return flights booked for Thursday morning, Friday and Saturday were left drinking.

At about 2200hours the Diaspora Kenyans started leaving , after of course taking expensive wine. Even the old seemed to have defied menopause challenges and were seen to hug tightly and even offered long kisses to those departing (strangers?). Others started singing honie songs like â€˜am wet and I know, crap your handsâ€˜

To conclude, senator Mike Sonko was more well behaved than Messirs Kipchumba Murkomen, Katoo Metito, Ichungwa and others, contrary to what you may want to believe!

That was the Uhuru visit, whatever happened as Uhuru arrived at JKIA, slapping one of his â€˜men in blackâ€™, Ruto speech et al hiyo sijui, uliza Dennis Itumbi and co, since Ionly arrived in Nairobi on Friday morning and not Thursday morning.