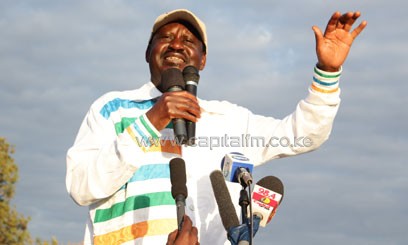 By Ben Agina for The Sunday Standard

Former Prime Minister leader Raila Odinga has opened up on how he feels about nascent President Uhuru Kenyattaâ€™s administration and his future in politics.

In an exclusive and candid interview, the former Prime Minister said it was almost 100 days since Uhuru took office, with nothing much to show for it.

â€œI hope the Government will get down to work and fulfil the pledges it made to Kenyans,â€ he said.

Raila at the same time signaled that he is not yet done with politics, firing a warning shot that those who think they can finish him politically are in for a big shock.

â€œIf you think you are finishing Raila, Raila will go to raia (the masses) where I belong,â€ he told The Standard On Sunday in a Nairobi Hotel.

He said his focus now is to strengthen his Coalition for Reforms and Democracy (CORD) alliance.

The former Premier has in recent past been focusing on retaining the Makueni senatorial seat for CORD left vacant by Mutula Kilonzoâ€™s demise.

At the interview however, Raila was non-committal on whether he would make another stab at the presidency in 2017, saying simply: â€œWe have just come from an election. I donâ€™t want to put the country in an election mood and opinion pollingâ€.

On his retirement package, the former PM said he has been denied what is rightfully his after serving his country for many years.

â€œThey have ignored my retirement package, yet I was a co-principal withÂ  former President Kibaki. Not a penny has been given to me. You do not deny somebody his retirement benefits because he has not retired from politics,â€ he said.

Raila also warned the Jubilee Government is not committed to devolution and every effort is being made to starve the counties of much-needed funding. He also spoke about his relationship with the ailing former South African President Nelson Mandela and his view on US President Barack Obamaâ€™s snubbing Kenya.

Below are excerpts from the
interview

Question: Considering the recent airport saga where you were barred from the VIP facilities, conditions by Jubilee-allied MPs that you retire from active politics to earn your send-off package, among other incidents, do you think the Uhuru Administration is targeting you?

I donâ€™t want to speculate whether they are targeting me or notâ€¦I really donâ€™t want to appear to be complaining, I am not the complaining type. But I hope they will be able to handle matters in a more decent, mature and civilised manner. Itâ€™s the right of every Kenyan, child, woman, the sick and the old to be treated with respect and dignityâ€¦I have done my service to this country. I donâ€™t want to make unnecessary demands.

But there is concern out there. Recently I was in Abidjan and met former Tanzania President Benjamin Mkapa and he asked me in Kiswahili: â€œBwana Raila, kitu gani hii huwezi pitia kwa VIP Lounge (Mr Raila, whatâ€™s this that you cannot be allowed through the VIP lounge)?

If you think you are finishing Raila, Raila will go to raia (the masses) where I belong.

On my retirement package, let me remind the Government that even those who retire from the Civil Service are paid their dues. You do not deny somebody his retirement benefits because he has not retired from politics. The Budget included former President Kibakiâ€™s retirement benefits and ignored mine, yet we were co-principals in the Coalition governmentâ€¦ Not a penny was given to me. I also have work to do.

If you are going to remove some privileges from me, then do it in a decent way â€” not by secret means. Why should I go to the airport and without been forewarned the entry and exit gates are closed and I am asked to use alternative gates? Whoever gave the instructions should have the decency of writing to us (former Vice-President Kalonzo Musyoka included) informing us of the regulation.

Q: You have been targeted again for theft, almost three times in a space of four years. What is your reading of the incidents?

I really donâ€™t know the motiveâ€¦but we have reported the incident to the Police and investigations are under way. Police say itâ€™s an inside job. In the Spectre Company incident, Police recovered the cylinders in Lukenya. In other incidents, nothing has been found. I donâ€™t know whether they are connected. Itâ€™s the duty of the Police to investigate crime and apprehend the culprits. I am basically still waiting for them to tell me what happened. I donâ€™t want to speculate.

Q: 3. The world cameras are currently on the ailing anti-apartheid hero Nelson Mandela. What are your thoughts and have you ever met him?

I have met Mandela several timesâ€¦he is a family friend. I have visited him several times. He was a very good friend of my father (the late Jaramogi Oginga Odinga). They were together in the struggle. During the first Organisation of African Union (OAU) Summit in Addis Ababa in 1963, Jaramogi and Mandela spoke on behalf of the liberation movement in Africaâ€¦ Madiba is an icon, he was my role model when I was in detention. I got encouragement from Madibaâ€™s resilience and fortitude. He gave me the strength to continue with the struggle. Whatever happens to him, he will remain immortal. His spirit will continue to inspire many people!

Q: Some Kenyans are hurting over US President Obamaâ€™s decision to skip Kenya in his tour of Africa. Please comment.

In my view, it is misplaced anger and disappointment. As much as Obamaâ€™s father was a Kenyan, he remains the US President. Whatever the Americans do, they do it for Americaâ€™s strategic interests. This is his second time in Africa and so far he has covered five countries. Africa has over 50 countries, why are the rest of the countries not complaining?

Q: IEBC is yet to reconcile poll figures three months after the election, a move that has delayed disbursement of funds to political parties. What is your take on this?

This in itself is a scandal and an indictment on the Independent Electoral and Boundaries Commission. This confirms our assertion that the results were messed up. Itâ€™s an open secret that the reason why they are not releasing the results is figures are not adding up. We will soon know the role NIS (National Intelligence Service) played in the results. According to the law, the final results ought to have been released two weeks from the date of the elections. We are on the fourth month. Itâ€™s ridiculous. I repeat, Kenyans cannot afford to go for another election with this Commission as presently constituted.

Q: Do you think Jubilee is committed to devolution?

I donâ€™t think so. They have shown by their actions that they are only paying lip service to the devolution agenda. You can see the kind of resistance in providing resources to the counties. Now the counties are being told that from July 1 (tomorrow), they can take over the functions of all ministries yet the National government has already budgeted monies to line ministries. Counties are yet to develop capacity in terms of manpowerâ€¦ they are set up for failure.

Secondly, why should the Provincial Administration be retained? The Governor now has to set up a parallel structure to the grassroots. This duplication of roles is likely to create a lot of confusion. Why should we have a Ministry for Devolution and channel Sh84 billion to it, yet the same money can be directed to the counties? This ministry is a reincarnation of the Local Government ministry. Jubilee Government wants governors to be used to handouts by having this ministry in place.

The Constitution spells out the two distinct systems of government and how they relate. All their actions are very clear indications that Jubilee is not interested in devolution.

Q: How is CORD plotting to retain the Makueni Senate seat, and will you be spearheading the campaigns?

CORD is a movement with competent leaders able to do a proper campaign. We hope there will be no monkey business this time around. They have tried to bar our candidate from running. TNA (The National Alliance) are complaining about our candidate and yet they do not have a candidate. I hope IEBC will not allow itself to be manipulated.

Q: How is ODM going about its restructuring, including filling in vacant positions of Executive Director, Deputy Party Leader, and others?

We are trying all we can to professionalise the party. ODM has hired a recruitment firm to try and get us a shortlist of names from where we will pick one person to become our Executive Director. We want to strengthen the Secretariat. We also have other vacancies. Our National Governing Council scheduled for July 5 will set the motion as we prepare for our National Delegates Conference later in the year.

We have just come from an election. I donâ€™t want to put the country in an election mood and opinion polling. I will concentrate on strengthening our party.

This article is republished from Standard Newspaper via link : http://www.standardmedia.co.ke/?articleID=2000087140&story_title=former-prime-minister-raila-odinga-speaks-on-president-uhuru-kenyatta-and-future-in-politics&pageNo=1