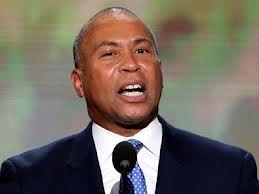 Deval Patrick, governor of Massachusetts in his well delivered speech called for Democrats to rally to re-elect President Obama.
….”And we believe that government has a role to play not in solving everybody’s problem in everybody’s life, but in helping people help themselves to the American dream … It’s time for Democrats to grow a backbone and stand up for what we believe.”