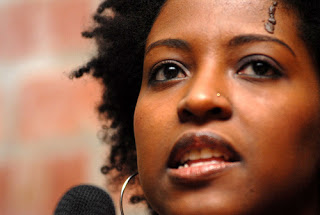 Ory Okolloh is one of Kenya’s finest is set for a new challenge, till May 2nd she held the position of Policy Manager for Africa at Google. Ory is famously known as Kenyan Pundit in social media circles, she isÂ  one of the founders of Ushahidi.Â  Her tweet on Thursday that she is quitting Google fueled speculation that she may be headed to Nairobi for a position of a cabinet secretary. There are two more slots yet to be filled by President Uhuru and word doing rounds is that one of the position may go to Musalia Mudavadi and another to most likely Ory!

“Ory Okolloh @kenyanpundit Today is my last day at Google. Been an amazing ride. Time for the next big thing.8:53 AM May 3rd”

With Uhuru Kenyatta tapping ivy league educated young people to join his government, it seems like the Harvard trained lawyer may be the next corporate giant to join Uhuru’s government.

Â Here is an extract from her page:
…When Kenya was engulfed in violence following a disputed presidential election in 2007, Okolloh helped create Ushahidi (Swahili: “Witness”), a website that collected and recorded eyewitness reports of violence using text messages and Google Maps. The technology has since been adapted for other purposes (including monitoring elections and tracking pharmaceutical availability) and used in a number of other countries. Okolloh also has a personal blog, Kenyan Pundit, which was featured on Global Voices Online. She also worked as a legal consultant for NGOs and has worked at Covington and Burling, the Kenya National Commission on Human Rights, and the World Bank in the past. Okolloh was born into a relatively poor family. She has said that her parents sent her to a private elementary school that they could “barely afford,” which “set the foundation for what ended up being my career.” She earned an undergraduate degree in Political Science from the University of Pittsburgh and graduated from Harvard Law School in 2005.