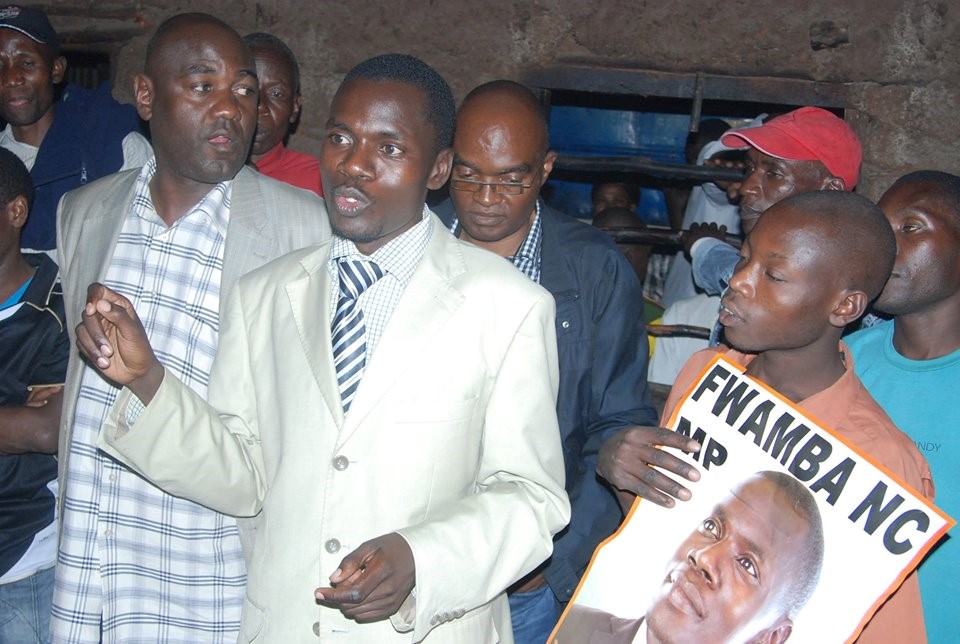 Former SONU vice chairman Mr. Fwamba NC Fwamba, one of the front runners on Maendeleo Party addressing his supporters during one of his door to door campaigns in Mashimoni, Mathare
By Gilbert Karani
The race for the Mathare By-election was finally opened on Friday, 11th July 2014 when the IEBC fulfilled its statutory duty of reviewing all the aspirants and clearing 8 candidates to run for the seat. It is important to remember that this by-election arose after the Supreme Court upheld the High Courtâ€™s ruleing that the last elections were â€˜irredeemably flawedâ€™ and hence a by-election was the only recourse to ensure the people of Mathare get the representative they deserved.

The outgoing MP Wanjui of TNA had served close to a year in Parliament, amid complaints of diversion and embezzlement of the CDF funds, favouritism and entrenched tribalism, CDF bursaries being traded dished out to non-deserving cases as rewards for sexual favours, and particularly with the issue of the location of the Mathare CDF Offices in another constituency. And with the Courtâ€™s decision, a stroke of luck was opened, for the residents of one of Africaâ€™s poorest and marginalized slum to elect a leader who will effectively represent the issues in the area.

Of the 8 candidates cleared by the IEBC, only 3 stand a realistic chance of clinching the seat, and they start with the former University of Nairobi student leader Mr. Fwamba NC Fwamba representing Maendeleo Party, David Kariuki of ODM and John Wanjui of the ruling coalition. The disqualification of the former Youth Enterprise Chair who was sacked due to incompetence has also bolstered Mr. Fwambaâ€™s chances.