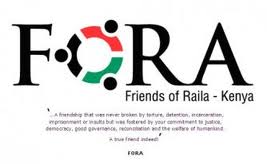 Friends of Raila, a lobby group that has been leading Prime Minister Odinga’s presidential campaigns is confident that Raila will emerge winner despite CORD candidate trailing in the tally so far.

Here below is the full statement:

1.The Friends of Raila (FORA) Secretariat thanks Kenyans for coming out in large numbers and conducting ourselves in a patriotic and orderly manner during the historic voting exercise yesterday, March 4, 2013.

2.We want to bring to your attention that we have our presidential tallying centre. We are receiving results from our Agents across the country as they are announced at the polling centres. The numbers we have look very good and we urge our supporters not to buy into the scare on TV screens. We have not released our in-house tallies because the Captain signed the IEBC code-of-conduct and he has urged us to be responsible and to wait on IEBCâ€™s results. We are continuing to monitor IEBCâ€™s provisional results and only making contact for clarification where there are any serious discrepancies with our in-house tallies. We reiterate that so far the numbers that we have are looking very good and our supporters should not be alarmed at all.

3.We remind Kenyans to note that so far IEBC has released only a fraction of the total votes cast across the country. Of importance to note is that the percentages of votes per county released by IEBC so far is not uniform. Different counties have different percentages of votes tallied so far. Statistically therefore, the national average, which is what TV screens are displaying, cannot and should not be used by our competitors or anyone to misinform and mislead the public that someone is cumulatively ahead. We urge our supporters and the public to look at the numbers being screened on TVs in context as well as in relation to statistics paradoxes. As of this morning IEBC had indicated they had provisional results from about 8000 polling centres. Across the country we have over 31000 polling centres.

4.We want our supporters to note that IEBC erred in beginning to release provisional results while voting was still going on in many polling centers. Also the initial provisional results that were released to the public were those from our competitorâ€™s strongholds. We wish to inform the public that at some point immediately thereafter the IEBC system went down, affecting the streaming of live results. In addition, our supporters should note that just a few tallies have been released by IEBC from our strongholds.

5.In closing, we want to say again that our in-house tallying numbers are looking very good and we are poised for a big win! We ask for calmness as IEBC continues to release the results. Always bear in mind that the numbers coming in are not uniform across the counties and therefore the average percentage cannot and should not be used as a national average. The results in so far are provisional. In fullness of time, we are headed for a big win.