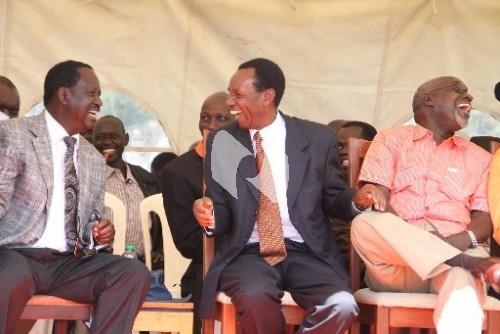 The Hon. Frankline Bett will not seek any elective post in the March 4th 2013 elections. He will instead be campaigning for Prime Minister Raila Odinga in a door to door campaign yet to be launched in Rift Valley. Below is hon Bettâ€™s full press statement.

I have been prompted by a barrage of speculations in the media and social sites on the need to clear the air on my political stance. I am here to do that and to spell out my future plans. Much has been said about my expected decamping to TNA/URP coalition. I would like to state here and now that my membership in ODM is neither negotiable nor under review for the foreseeable future. Nothing shall prove this, more than the energy I will bring to ODMâ€™s campaigns right from the grassroots to the national level.
As we speak, I have lined up a series of activities that will ensure that the CORD coalition has a strong presence in the whole country starting with the Rift Valley. We will win seats and compete effectively for votes with our competitors. Already, I have slated a meeting to take place before this Christmas that will bring together all ODM aspirants for the various positions in Kericho and Bomet counties.
In order to effectively carry this out and after consultations with my family, my party leader, colleagues, the people who elected me and the people of Kericho County; I have resolved that I will not be contesting any seat in the 2013 General Elections.
I know this move will disappoint many of my supporters in the constituency and the people of Kericho County. I have this to tell them: Donâ€™t mistake this move for a retreat or surrender. This is just but a strategic maneuver in the battle without compromising my principles and beliefs at the altar of political convenience. I will come back stronger and better armed to serve you. I thank you most sincerelyfor the chance you afforded me to serve you.
Rest assured, dear friends, that I will not be away for long. After these elections, I will take time to reflect on my 33 years of service to this nation, to write my memoirs and then to prepare to offer myself for the presidency in 2017.
To those who were saying I am retiring, I wish to emphatically tell them that I am not yet done. I still have a lot in stock to contribute to this nation. Somebody once said â€˜A man is not old until regrets take the place of dreams.â€™ My dream is to be the 5th President of the Republic of Kenya.
I take great pride in my achievements as Member of Parliament for Bureti Constituency. I am particularly proud that the Sotik-Cheborge-Roret-Sigowet road is being upgraded to bitumen standards under my charge. The same is ongoing forLitein-Cheborge-Kibugat road. I am also happy that Bureti Technical Institute became a reality under my watch. The people of Roret too are a few months away from having a pineapple processing plant through my initiative. I was also able to connect electricity to all secondary schools in my constituency, not to mention the two Centers of Excellence in Korongoi Girls and Litein High School.
In fact, I accomplished 96% of all that I had set out to do in my 2007 manifesto.
On the national scene, when the history of the biggest road infrastructure development in Kenya will be written, it delights me to note that the name of one Franklin Kipngâ€™etichBett as Minister of Roads alongside that of His Excellency Mwai Kibaki and the Right Honorable Raila Odinga will feature prominently.
As my tenure as MP comes to a close, I take to the trenches to campaign for ODM a contended man. My electorate had asked me for development and I delivered, I leave behind my record to speak for itself.That notwithstanding, I will still discharge my duties as MP for Bureti until I hand over to my successor.
On March 4th 2013,please join me in ushering in a just, equitable and progressive government by voting for the CORD coalition.
May you have a Merry Christmas, a Happy New Year and most importantly, free, fair and peaceful elections in 2013.
Thank you.