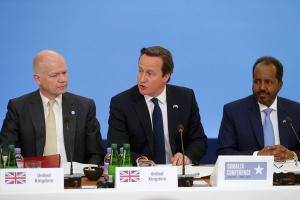 Doubts are emerging over news reports by mainstream media that President Uhuru Kenyatta held talks with United Kingdom Prime Minister David Cameron. A close review of all video footage being screened captures H.E. Kenyatta in a meeting with Foreign Secretary William Hague. No credible picture or even a Photoshop of Kenyatta holding talks with Premier Cameron is on circulation either by local or international media.

United Kingdom is a country that is governed largely by tradition, they dont even have a written constitution but just statues and the common law tradition. The protocol as per tradition is that state visitors usually meet the Prime Minister at his official residency- Downing street number 10, and journalists including cameramen are allowed to take photos before (inside the office0 and after the meeting (outside the gate-with visible branding number 10 downing street.

Not even the British giant- the BBC have any pictures despite reporting that H.E Kenyatta was scheduled to meet Prime Minister Cameron.

Suspicion is also fuelled by the NTV report that President Kenyatta met Prime Minister Cameron first before meeting William Hague- well, in pure protocol terms the president should have met William Hague first and then proceed to meet Premier Cameron.

Unless there is a proof of such a meeting, Kenyans should only believe/know that our dear President only managed to hold talks with Foreign Secretary William Hague. If Kenyatta held any talks with Premier Cameron then it must have been at the sidelines of the Somali conference- BUT then how come there are NO photos?, why the secrecy? the PPS however gave a detailed press release of the said meeting.

FACT : Uhuru DID NOT VISIT downing street number 10 as per the United Kingdom’s tradition of welcoming state visitors, the reports were part of the bigger PR.

It was indeed essential contacthttps://www.kenya-today.com/politics/doubt-uhuru-kenyatta-met-david-cameron

JUST REVIEW the video footage below by capital FM and NTV >>> PM Cameron is nowhere..>>