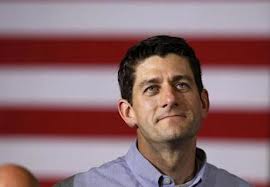 This article titled “Democrats’ nerves start to show as Ryan fires up conservative voters” was written by Ewen MacAskill in Washington, for The Guardian on Thursday 16th August 2012 20.03 UTC

After the 2008 Sarah Palin debacle, Mitt Romney was understandably keen to pick a very different kind of vice-presidential running mate. Instead of a relatively inexperienced governor of an outlying state, in Paul Ryan the Republican presidential candidate has gone for a consummate political professional with 14 years of congressional experience under his belt.

But while Ryan is unlikely to have embarrassing, flustered moments in television studios when asked to list the daily newspapers he reads, he is proving every bit as controversial and polarising as his Alaskan predecessor.

The Democrats have dubbed him a “certifiably rightwing ideologue”, claiming he is out to destroy America’s modest welfare programmes.

Usually, vice-presidential candidates have only a few days in the media spotlight before retreating into obscurity, apart from one VP nationally televised debate in October. Palin did not follow that pattern and neither does Ryan, who after less than a week in the job has redefined the campaign and looks likely to go on doing so.

The Romney campaign chose him to deliver the Republican base vote amid fears that die-hard conservatives could cost him the White House by staying at home on election day rather than turning out for a candidate they are ambivalent about.

Conservatives are coming round, reflected in the crowds Ryan has been attracting on his tour of the swing states this week. The Democrats have been sending out panic-laden appeals for donations, one of them expressing concern over the size of the crowd. One of the appeals, for or more, said of Romney-Ryan attacks: “This could cost us the election.”

Charlie Gruschow, the Iowa-based founder of the Tea Party of America, said there had been a large crowd to see Ryan in Iowa. Gruschow is one of many conservatives who were slow to warm to Romney, having first supported Herman Cain and then Newt Gingrich as the Republican presidential candidate.

“Ryan has fired up the base,” said Gruschow, after speaking to friends in the evangelical Christian community and the Tea Party who he said had been a little hesitant, a little concerned, about Romney. “I think now that Ryan has been selected as his running mate, there’s a lot of enthusiasm. He is a Tea Party guy.”

The choice of Ryan marks a major change in strategy by Romney. Until 1 August, when he said he had finally decided on Ryan as his running mate, Romney had been hoping to win the White House simply on widespread anti-Obama sentiment. Central to this strategy was focusing on the slowness of the US economic recovery and to make himself as small a target as possible, offering little in the way of policy detail.

But that strategy was not working. The US is so polarised that there are, according to the polls, few undecided voters left. Compared with 2008, when about 25% of the electorate had still to make up their minds at this stage in the election, only about 5% are undecided. Both the Democratic and Republican strategists have concluded that the winner on 6 November will be the campaign that fires up its own supporters, that gets its base out, rather than the one that wins over the independent swing voters.

Larry Sabato, professor of politics at the University of Virginia, said: “It is base v base. There are hardly any independents.” At the cost of winning over a percentage of that small group in the centre, the campaigns risked alienating their core support, he said.

This is why Romney picked a running mate with undisputed conservative credentials, from his love of the writings of the free-market ideologue Ayn Rand in his youth to his more recent budget plan to slash welfare spending.

Ryan, aged 42, was born in Janesville, Wisconsin, into an Irish immigrant family whose business interests and network made them important players in their area. One of the biggest upsets in his life came when he was 16, when he found his father, a lawyer, dead from a heart attack, at the relatively early age of 55. As a result of that, intent on avoiding the same fate, he became a fitness enthusiast, a fan of a workout called P90X, a mixture of yoga, martial arts and other exercises early in the morning before starting his day in Congress.

He is socially conservative, strongly Catholic, firmly opposed to abortion, even in cases of incest and rape.

In his youth, he worked at a grill at the local McDonald’s but otherwise has spent almost his entire life in politics. After university, he went to work as an intern on the staff of Republicans in Congress before becoming a congressman himself 14 years ago.

He is liked by Democrats as well as Republicans in the House at a personal level, in spite of sharp differences over policy. For a large part of his time in Congress he was isolated, a lonely figure at thinktanks, a policy wonk arguing in favour of wholesale reform of welfare to bring down spending.

When he advocated such an approach in 2009, he had few supporters. His time came last year in the standoff between Obama and House Republicans over cutting debt. Few other Republicans had alternative ideas to put forward and Ryan’s plan won favour. The House voted for it by 235 to 193.

One of the contradictions in Ryan’s politics is that, in spite of his reputation as a costcutter, he voted for the huge bailouts to stimulate the economy and the car industry. He has since said he regretted voting for the programmes.

His views have won him the support of many wealthy conservatives, such as the Koch brothers, and media moguls such as Rupert Murdoch, whose Wall Street Journal campaigned for Ryan last week as vice-presidential running mate. These contacts have made him one of the best-funded members of Congress, with a campaign war chest of more than m (Â£3.2m).

In spite of frantic appeals this week from Democratic fundraisers for more donations, senior Democratic strategists have said privately and publicly that Romney has made a mistake and that the choice of Ryan offers them a large list of areas for attack, especially over Medicare.

The Democrats, like Labour in Britain, have long been regarded as the party that protects Medicare, which was introduced by the Democratic president Lyndon Johnson in the 1960s.

Some Republicans are apprehensive too. The Politico website created a stir this week when it reported mainly anonymous Republicans saying Romney may have blundered.

“This could be the defining moment of the campaign. If they win the battle to define Medicare, then I believe Romney wins the presidency. If they lose it, then they lose big in the fall,” one of the Republican strategists said.

The author Joe Klein, who has covered many US elections, is dismissive of Ryan’s budget policy, questioning whether his thinking is as deep as some Republicans claim and describes him, in the current edition of Time, as living in a “libertarian Disneyland”.

Romney wants to make the election about Obama and the slow recovery from recession, but the Democratic campaign has kept him on the defensive for more than a month: over his record at Bain Capital, where he made his fortune, some of it in closing firms; over his refusal to release more than two years’ worth of tax returns; and then his disparaging remarks over the London Olympics. And now it is about Medicare â€“ and will be in the weeks, or even months, ahead.

The highest ratio of people on Medicare is in Florida, one of the key swing states with a high number of retirees. The second highest is Ohio, another key swing state.

Brad Coker, the head of Mason-Dixon polling, which is based in Florida, said he thought Ryan was the best of the bunch considered by Romney. “All the discussion about the base not being excited has now gone away,” Coker said.

He does not think Medicare will be a problem in the long run. In the past, it has been a strong card for the Democrats but the Republicans can counter that line of attack this time with Obama’s healthcare proposals, which Coker said are not popular either.

Regardless of the election result, Larry Sabato thinks Ryan cannot lose. If Romney wins, then Ryan, as vice-president, will be well placed as a Republican presidential candidate for the future. If Romney loses in November, Sabato says Republicans will blame Romney rather than Ryan and predicts he will be the frontrunner, or close to it, when the party looks for a presidential candidate for 2016. “He is a guaranteed winner,” Sabato said.